I CAN & AM OUTGROWING
this toxic victim role!

FOR ALL ACoAs
Emotional damage: Scapegoats (SCs) are forced undeservedly to carry the family’s burden of disowned defects. They drown in the pain of those closest to them, & later in the collective pain of the society – with no one to comfort or understand them

In the process SCs are robbed of experiencing their own pain, denied the opportunity to learn how to contain, endure & grieve the suffering they’ve had to ignore & bury. (What is Scapegoat child abuse?)

No matter what our toxic family role was as kids, many of us tried to bring attention to the family’s dirty laundry, so it would get corrected, but in most cases that never happened. (This is true even if parents or siblings eventually get into 12-step Programs, but still have not done their own FoO work).
We assumed that if we could make the adults own their emotional baggage, our torment would stop & life would be great.

And so we pushed & pushed – but it only got us more abuse.

• ACoAs desperately want justice / fairness! Failing at this childhood goal, some continue trying to ‘fight injustice’ as adults, especially those of us who were scapegoated. We may become ‘expose´journalist, prosecuting attorneys, ‘church ladies’, public service advocates or whistle blowers….

However, most of us live more conventional lives, with little social or political clout. Even so, we compulsively insist that dishonest & hypocritical friends, relative, mates, bosses (& elderly parents)…. admit their flaws. It didn’t work at home, & rarely works in the adult world either. It still brings negative feedback & so another layer of abuse

TO HEAL
Ask: “Am I willing to do whatever it takes to give up my Scapegoat role?” That’s not always an easy Yes, but do-able. Remember, if you continue to be :
😠 belligerent,  demanding, controlling
-OR-
😔compliant, over-agreeable, too silent, submissive or unclear
THEN
👎🏽 it’s easier for others to end up avoiding, making fun of, manipulate or attacking you
That’s even true coming from people who are not usually scapegoaters!  It’s a normal human reac 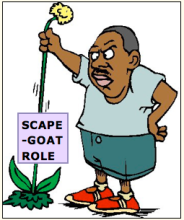 tion toward someone acting out their WIC’s damage.
BUT – as you heal the inside, you’ll get better reactions from others! Who knew??

• Once you acknowledge this toxic role that was forced on you, & truly believe it was not your fault (Al-Anon‘s 3 As), you can observe how you perpetuate the syndrome, & slowly change the pattern

❇We can bear to re-feel our old pain IF & when we’re comforted, understood & treated with respect by one or more safe & caring people. Then apply that treatment to ourselves.

• Practice saying NO – at first in your head – a lot! Then try it out on small things you don’t like or don’t want to do – with people or situations that don’t feel TOO ‘dangerous’ if it doesn’t work out the way you hoped.

b. PRESENTATION: ✦ Walk into every room with head held straight, look at people directly, don’t slouch, walk ‘confidently’ – as if you believe you have a right to be here – even if you don’t fee

l like it.
✦ Dress appropriately for the situation you’re in
✦ Look around & notice what’s going on, notice who’s NOT safe (using your inner radar) ….

c. RELATIONSHIPS: Whenever possible, stay away from the people who originally set you up, or who still treat you as the black sheep in any situation.
Look for people who are already kind, or at least respectful.
If you aren’t getting any of your needs met or are treated shabbily, you can walk away.
We MUST keep the focus on ourselves – owning & correcting our own character defects, AND appreciate & cherish our talents & skills.