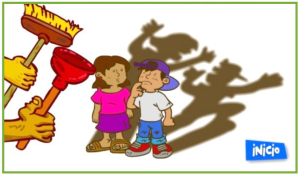 I NEED TO GET IT –
that their attacks are not about me!

SITE: Why does a narcissist need to have a scapegoat?

REVIEW: SCAPEGOATING is a way of acting without integrity – the perpetrator (P) slandering another person in order to take the focus off of themselves.
Most family members, if not all, seem to accept it as the normal way to treat the victim – verbally, emotionally &/or physically abusing one child – & look the other way when the Sc is bullied or otherwise mistreated & made the ‘black sheep’.
It’s usually a long-standing pattern in the whole family, perpetuated because it’s experienced as advantageous – to keep the status quo.

HOW were YOU Scapegoated (Sc)?
This list applies to what happened in childhood, but may still be going on, no matter how old you are. You were the Sc IF YOU were/are —

• picked on by either parent to be the ‘bad one’, who looked for things to make you wrong – most of the time unjustified

• put in the role of family outcast, treated with disdain or disgust by family – & then by yourself
• blamed for others’ actions, & held responsible for family problems, conflicts or challenges, that had nothing to do with you

• attacked / punished for telling outsiders the truth about abusive, inappropriate & hurtful family dynamics (‘whistle-blower’)
• never believed when telling the truth about things that actually happened to you or around you, even if you had proof
WERE :
• blamed for &/or punished for what a sibling did, or for the very same things the other kids were allowed to get away with
• accused unjustly, your actions & motives exaggerated or lied about
• told or shown that your accomplishments were bad, ugly, unimportant, useless, worthless

• ignored or rejected by anyone who was/is easily influenced by your torturers (in & out of the family), & perhaps still are
• physically abused (slapped, beaten, kicked, thrown against walls….) whether you did something ‘wrong’, but even when not

• repeatedly accused of behavior only the scapegoater is / was doing (More....)
• constantly given contradictory messages or expectations
EXP:
– Parent regularly yelled at you, then accused you of being abusive
– You were being genuinely thoughtful & caring, but told “all you care about is yourself”
– You were the mentally healthiest family member, but accused of being sick, bad, selfish….. Add your own crazy-making experiences

Bill Taylor, of Stressed Health Professionals & Families says: “ One of the most destructive patterns is the scapegoating of a physically or sexually abused child, especially when the mis-treatment is unknown to anyone except the victim & abuser

REACTIONs: Such a victim will often misbehave or be completely withdrawn, take out their anger on others, develop depression or other signs of emotional distress – as a way of handling the anxiety about the abuse.

They are then punished for acting out, by attacks & beatings, which create even more trauma, increasing the child’s misbehavior.
“Most people can’t imagine the daily hell such children or teens suffer from the combination of physical abuse & emotional scapegoating.” (MORE….)

NOTE: The above list applies to many ACoAs, especially in families where all the kids were abused & neglected in various ways.
However, the focus here is on the one – out of a number of children – who is tortured, while the others are treated a great deal better – at least

💧 Not every Sc is tortured to these extremes, but everyone in a scapegoating family is harmed, even those not directly picked on. Just living every day in a sadistic environment eats away at one’s soul – especially vulnerable, developing personalities. SO – if you were not ‘it’ in your childhood, it doesn’t mean you got away emotionally, psychologically & spiritually undamaged.

NEXT: ACoAs being Scapegoated (Part 7a)