I CAN ONLY STAND MYSELF
if I pretend to be superior!

SITE: “The Difference Between Confidence & Arrogance is Empathy“
◆ Teaching Humility in an Age of Arrogance

QUOTEs:“Much to learn, you still have.”YODA to Count Dooku, StarWars II
• “Do you wish people to think well of you? Don’t speak well of yourself” ~ Pascal
• “Confidence without humility is Arrogance. Humility without confidence is self-deprecation”
• “We are what we repeatedly do. Excellence, then, is not an act, but a habit” ~ Aristotle

DEF: ARROGANCE (ARR) = inflating, exalting, over-valuing oneself. It’s “bigging yourself up”, whether publicly or just inside your own mind, & often involves knocking others down at the same time.
“The act or habit of making unjustified declarations in an overbearing manner…. exorbitant claims of rank, dignity, estimation, or power”

It’s one of 7 features of “dark” personality traits, based on 7 basic fears. These are the False Self’s primary means of self-preservation. (MORE…) 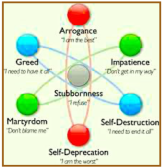 • Arrogance = FEAR of vulnerability
• Greed = f. of lack / not having enough
• Impatience = f. of missed or lost opportunity
• Martyrdom = f. of worthlessness
• Self-Destruction = f.  of loss of control
• Self-Deprecation = f. of inadequacy
• Stubbornness = f. of change or new situations

All personality traits fall on a continuum, from mild to severe. The extreme  expression of arrogance is Narcissistic Personality Disorder.  2 main types:
• Vulnerable – those who use arrogance to compensate for their insecurity
• Grandiose – who truly believe themselves to be perfect, without weakness

CHARACTERISTICS of ARR people (A G. Cerdan)
🕶 Tremendous need to be praised
🕶 Constantly talking about themselves & their achievements
🕶 Charming – at first. Behind it is contempt, lack of empathy, resentment & selfishness

🕶 Trouble forming & keeping relationships
🕶 Over-compensate for insecurity – loud, stubborn, show off dress & makeup….
🕶 Don’t admit mistakes, can’t handle criticism
🕶 Won’t ask for forgiveness
🕶 Intolerant of anyone who doesn’t like or approve of them

ARR. is the result of Negative childhood experiences, causing:
a. misconceptions about the nature of Self, life & others
b. constant (hidden) terror & insecurity (fear of abandonment)
c. dysfunctional strategy to protect the Self, from the WIC
d. a False Persona to hide a, b & c in adulthood

• We all have the potential for arrogance, but for people with a strong fear of admitting or showing shared human limitations, it can become a dominant pattern.  This character defect comes from a need to be seen as flawless, because exposing weaknesses makes them feel unbearably vulnerable (like Ennea Type 1, but not exclusively).

Hidden belief: “Who I really am will never be good enough for others to accept. So no one must ever see the real me.”
ACoAs are very familiar with this obsession with perfection, because our family punished or made fun of normal childhood needs & behavior, which they treated as unforgivable flaws! 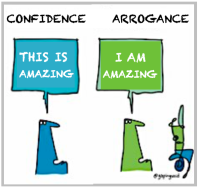 Opposite poles
– – Vanity (unhealthy False Self):
an irrational / obsessive belief in our superior attractiveness or abilities as reflected in the eyes of others – which is falling for our own lies (egotism & narcissism).
It comes from the Latin vanities: empty, foolish, futile, untruthful

+ + Pride (healthy Confidence): recognizing & valuing all our good qualities, rather than exaggerating or making them up to mask or deny normal human imperfections. It’s a positive expression of the True Self, being realistic about our innate value as human beings & our accomplishments  (“Worst & Best Personality Traits” – lists)

WHY ARR people seem to Succeed
⚡️Use anger to intimidate
⚡️Being ‘difficult’ makes others give in to them more easily
⚡️ Being dominant / domineering allows them to steal the show
⚡️Believing they’re superior helps them go for what they want
⚡️In disagreements, they attack the person rather than the issue

ARR can be built on a wide variety of sandy/swampy foundations, such as:
– family lineage, ‘connections’, money, possessions
– achievements based on natural talents + hard work
– illusions / self-deception about non-existent personal qualities
– being stuck in past glory & accomplishments
HOWEVER – none of these things provide genuine self-esteem, which only has one source: Unconditional love!