PREVIOUS: Negative use of anger #1

Toward SELF
ATTENTION – a negative way to be seen, heard, respected, feared…
FALSE POWER – that lets you think / feel like you’re in charge of Self, others & life in general, when you’re actually NOT
ISOLATION – being so angry at the way people are – disappointing, hurtful, thoughtless, unavailable…. (“The whole world sucks, so I’m not participating”)

Toward OTHERS
ATTACKING – display of anger used as a weapon, but not necessarily actually feeling angry : to intimidate, punish, destroy someone’s self-image, shock into submission

COERCION – use your position of power to dominate, force someone to back down, be quiet, do only what you want – against their will…. Bullies only win if they appear powerful AND the other side’s options are limited 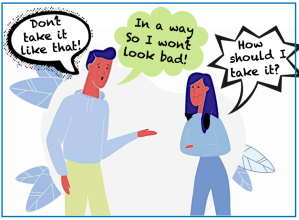 • to mange or change how some else ‘feels’
• to get your own way about something, at another’s expense
• to make someone feel guilty so you don’t have to be responsible

DEFENSE against:
• being abandoned (“if I keep finding fault & being angry at you, I can leave first”)
• others’ emotions, which can trigger Es you don’t want to feel, also against someone’s FEAR, which makes you feel scared too
DEMEANING another to feel one-up or less vulnerable : make fun of, dismiss, degrade, insult, roll one’s eyes, shame, mimic….

DISTANCE: prevent others from getting too close, in general
• avoid  1-to-1 physical &/or emotional intimacy
• as false boundaries / walls to protect your vulnerable inner self
• to block someone trying to communication

DIVERSION / deflecting someone’s attention away from:
• a sensitive / painful topic
• information you wants to hide
• facts you don’t want to hear
• situations you can’t handle or want to escape
• a personal weakness or limitation

ENTITLEMENT
Getting away with inappropriate anger creates & then reinforces a false sense of entitlement —> an illusory feeling of moral superiority that can be used to justify rude, arrogant, immoral actions, with the belief that the “end justifies the means” (bullying, collateral damage, domestic abuse, prejudice, purges, terrorism…)

MANIPULATION – keep people off-balance, even when not really angry,
• so you don’t have to do what they want, (but won’t admit it)
• can’t give them what they want (afraid to say NO)
• stop them from expecting or demanding something of you
• deflect their anger at you

• of your abusive/neglectful parents on to others, OR
• projecting only negative outcomes into the future – about something you want or is important to you, but assume you won’t get
PUNISHMENT / revenge : as payback for real or imagined injury

SEPARATION
• always starting a fight before leaving
• inappropriate way to separate, distance or leave (cover FoA)
• destroy other people’s boundaries (need for symbiosis)
SUPPRESSION
• deny practical & realistic needs of another – so you don’t have to deal with or provide them
• ‘stop’ others expressing their emotions (“Don’t cry!”) – so they don’t trigger your own vulnerability, OR
because you believe you have to fix them but don’t know how & don’t really want to!

ANGER energy gets pushed out in a jagged way, disturbing the Liver, whose job is to lift energy up to the S 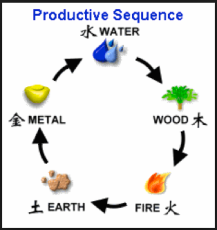 pirit, at the center of the SHENG cycle

• Used in Acupuncture, this cycle represents creativity, generation & production, each element feeding Qi to the one on its right, clockwise – creating that next one, as a mother creates a child. (Scroll to 5 element chart)  / ALSO: “Applying the 5 elements”

EXP: LIVER = Wood transforms (by burning) into HEART = Fire.
Wood is the Element of determination, anger & assertion. It produces the creative urge to achieve – which can turn to anger when frustrated. Wood-anger, expressed aggressively, can also come from not feeling in control of life events.

NEXT: Positive Uses of Anger, #1