⬆️ HAND : Emotions for each finger (painful & pleasant forms), with  senses & body areas, & how they’re connected to the Spinal Column

feeling, mainly driven by what we’re thinking, since the combination directly effects how we act (TEA)

• Whenever possible, especially around people we don’t know, are not close to, or who are unhealthy (active addicts & other narcissists), it’s self-protective & appropriate to only show how we feel on the outside of the Emotion Circle 🔽, because the reactions are milder.
In most social situations, people will be more

comfortable around us if we’re ‘tentative’ or ‘pleasant’ — > rather than ‘hysterical’, ‘aggravated’ or ‘enraged’…. making us more likable, which we all want, whether we admit it to ourselves or not. ( 2 CHARTS )

ALSO, if we do let out how we actually feel – 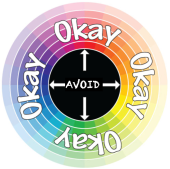 from the center of the circle (intense) – it can influence others to become reactive too, as a result of echoing our feelings (via mirror neurons), so that when we:
• get enraged, others may also get angry
• feel depressed, others can get ‘down’,
JUST AS when we:
• get exited, others tend to also feel happy
• feel calm, others can feel more relaxed

REMINDER: This in not to deny our emotions, nor to be co-dependent – worrying about how others feel. Always distinguish between having an emotion & expressing it. It is a reminder :
➼ to stay awake for what’s going on inside, & work on letting the Adult ego state be more in charge, rather than the WIC
AND
➼ that we do have an effect on others – surprise, surprise! which many of us don’t realize – or believe – since our family never saw or responded to the REAL us.

For many of us, we were treated only as a burden, a nuisance or as a useful ‘tool’.  So now we need to become visible to ourselves & choose healthy people to correctly mirror us (validate) – people who have good boundaries & a clear sense of their own True Self.  (MORE…..The Anger Thermostat)

Anger as predictive SYMPTOM of Psychological Disorders
Intermittent Explosive Disorder (IED)
Periodic eruptions of anger & rage, which are not in proportion to circumstances,

most commonly seen in impulsive young men – but also for some ACoAs. In this state they may threaten, assault others, harm themselves, or destroy property. Such eruptions come after a period of heightened internal tension, followed by a feeling of emotional release, & then immediate regret

Anxiety Disorders
Sufferers of Depression & Anxiety are often in a continual state of tension. Their overworked nervous system alternates between hyper-arousal & exhaustion, priming the brain for an anger or rage reaction.

This group includes those with Generalized Anxiety, Panic attacks, PTSD, & Phobias. Also, OCD (mainly physical), setting the stage for resentments, because the person is more likely to hang on to envy / jealousy, fear of abandonment, & fantasies of being disrespected, harmed or victimized.

Personality Disorders are characterized by overall rigidity & denial.
• Obsessive Compulsives (OCPD – mainly psychological) are demanding, judgmental & perfectionistic. OCD / OCPD sufferers act as if their life depends on reaching a particular goal or having their demands met. Anger rises when those are frustrated

• Narcissists (NPD) are subject to rage reactions when their desperate need for attention or admiration is frustrated
• Histrionics (HPD) are vulnerable to angry outbursts when emotionally flooded
• Borderlines (BPD) are exceptionally vulnerable to anger because of weak or nonexistent sense of belonging & self-worth. This causes a roller-coaster emotionality, with rage reactions & unstable

CONSTRUCTIVE ANGER
In contrast, for healthy people, anger comes from their Adult ego state, in response to a specific present-day issue, prompting us to act in a positive way to remove an obstacle in our path, or to right an injustice. (More in other posts).