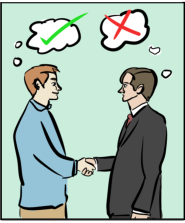 I DON’T KNOW WHY
they’re being so mean to me!

The HIGH COST of ‘too nice’
Co-dependence is a survival strategy developed in childhood in an alcoholic or otherwise narcissistic family & community. They prevented us from developing a clear sense of our identity, so we didn’t learn how to be our own knowledgeable & loving caretaker. We may not realize we’ve taken on this ‘persona’, but a deep part of our psyche wants to please others to avoid negative reactions we’re afraid we won’t be able to bear.

Now, as physical adults – but reacting emotionally as a child – we use co-dep tactics as sneaky ways of expecting other people to fill the hole in our heart left by our unhealthy parents. Unaware of being angry & scared, & not believing i

n ourselves – we constantly look to others to tell us who we are, what we should wear, read, think, feel, study, do for a living…. even to giving us permission to exist! – because any differences threatens our WIC. We end up ‘wearing’ people’s personalities – at least when we’re with them.

This makes us vulnerable to the moods of others, as if their state if mind is a reflection on us – so if they treat us well we’re OK, but if they’re cranky, critical or just gone – we blame ourselves and feel bereft!  With weak or missing boundaries we’re everybody’s puppet, jerking an uncertain way thru life

Q: What if the one basic requirement for boundaries?

ANS: Our NEEDS! Knowing what they are, having permission to own them & then implementing as many as possible. You can’t draw a line in the sand unless you know where that line is supposed to be – which is based on your True Self.

People-pleasing
As co-dependents we are people-pleaser (P-P) – who will do anything at all, no matter how humiliating & self-destructive – to keep others attached to us. Many ‘experts’ warn that being too nice will lead to a loss of self-worth – implying we had it at sometime in the past. This may be true in some cases, but not for most ACoAs. People-pleasing is rooted in & springs out of a lack of healthy core & genuine self-esteem – to start with.

As a result of this lack,

co-dep P-Ps are most easily attracted to friends & mates who are controlling, who always seem to know what’s best, & happy to tell everyone. And they want to be with us because we let them be in charge all the time. If we had at least one such parent or other important caretaker – we make the unconscious connection between love & being controlled. We think that way we’re safe & don’t have to make the effort to figure out what we want.

However, no matter how battered, each of us does have an inner voice of our own that wants to be heard. So eventually, in a long-term relationship with any controller – we can get more & more anxious, resenting the other person for always getting their way. But afraid of rejection, we may start withdrawing or become passive-aggressive, instead of leaving or being more assertive. (MORE….)

Being “too nice” can backfire
a.  Others often see it as a sign of weakness & some will use it as an opportunity to take advantage of you. (More in future post)
EXP: Researchers at Notre Dame University found that men who were considered “agreeable” (easy-going, cooperative) made 18% less money overall than less agreeable ones, & ‘nice’ women made 5% less than those who were less so.  (Study)

b. If you’re ‘too nice’, wanting social harmony at any cost,

you avoid conflict as much as possible, but end up harming yourself. Hiding from your own anger, & desperately afraid of making others angry at you, you’re much less willing to stand up for yourself, or say things like: “No, I don’t want that / No, I won’t do it / No that’s not what I meant….”

This avoidance actually creates more disruption, since problems never get aired or resolved, & in some cases cause others great harm as well!
EXP: Another study discovered that ‘nice’ people were more obedient toward authority & their rules – whether good or bad. When the researchers repeated the famous Milgram Experiment, participants who scored higher on traits like “agreeableness” & “conscientious” ended up giving higher shocks of pain.