MBTI & Brain Scans
• Brain activity does not equal behavior or preferences
EXP:  Most who enjoy brainstorming do not show the holistic ‘Christmas Tree’ pattern typical of Ne types, who excel at trans-contextual thinking

• Although areas of the brains can be identified & connected to the main function of each Type, we can not assign a Cognitive Process to those areas
EXP: F7 handles several functions, including mimicking others’ behaviors, asking “what if?” & drawing conclusions based on context

⬇️ USAGE
•  The entire Prefrontal region is used a great deal by all Types, but those with a dominant “Rational” function (T or F), either E or I, show higher activity in Fp1, while ‘Irrationals’ (S or N) rely more on Fp2 (from Scionics)

• In general (with exceptions, of course) Es are more apt to use front of the brain, while Is tend more to use back areas

• Sensates tend to use Left side more (analytic), & Intuitives use the right (holistic)
• Thinkers show more activity in the reasoning areas (F3, F4, P3, P4 ), & Feelers have more access to C4, while Ts use C3 more.

• Every type uses some region in common with their ‘opposite’ type. An ISFP (Fi-Se) relies on some of the same regions as INTJs (Ni-Te) or ENTJs (Te-Ni)…

▪︎ Everyone prefers some brain areas over others. When one region has maxed out its activity, another will take over

🌸 Result – each person has a somewhat different set of emotional dynamics

EMBARRASSMENT
“The brain acts as a feedback device. It gets external input which it considers along with other data (memories, values, theories), & then prompts us to act (or not). So, everyday distinctions like ’emotional vs rational self’ don’t really exist in the brain, which is more like a forest ecology than a matrix.

Many regions are involved in emotions as well as thinking, such as region T5 on the lower left, which helps us pay attention to social feedback. It light up 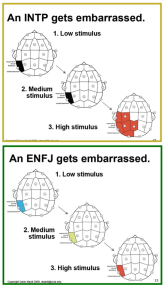 when we notice how others are responding to us, such as being criticized, noticing a smile of approval…. or feeling embarrassment, which may spur us to change our behavior. (More….)
2 EXPs:
• ENFJs are quite easy to embarrass. Only the T5 is affected, but reacts to even minimally uncomfortable situations. The level of embarrassment is confined to that one area, & but increases proportional to the intensity of the circumstance.

▪︎ Normally, INTP’s T5 is rather hard to activate. But when embarrassment finally registers, reaction spills over to several neighboring regions, including ones responsible for dexterity, which can explain why some get klutzy.
⚫️ Always represents non-activity
🔴 shows the sudden emotional flooding in 5 other areas around T5 as well:
T3 = sexuality, C3 = factual recall / move step-wise, P3 = integrate vision /sensation & identify objects, O1 = build/rotate objects, & part of the mid-line. 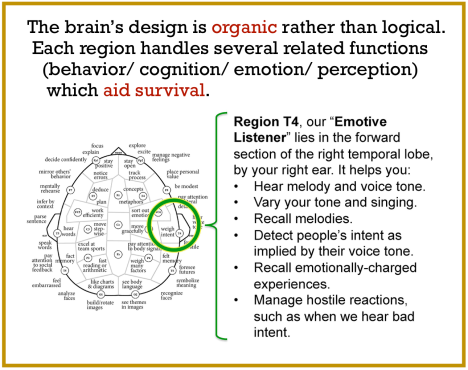 : T4 also allows us to have a sense of humor!

“A bus station in where buses stop, & a train station is where trains stop. On my desk I have a work station.” 🤪
“To steal ideas from one person is plagiarism. To steal from many is research.”

⬇️ From: AncientSpirits (Dr. Nardi) 12 /2017
“EQ”: EMPATHY, MBTI Types & Brain Scans
The MBTI framework doesn’t cover emotions. So here’s an example from “Our Brains in Color” to consider. Multiple neocortex regions are involved in our functioning, & It’s rare for a person to have skills in all of them, but each Type has their strengths.

▪︎ ISFJs tend to be a master of using FC6, ➡️ which helps sort out emotions in a social context

▪︎ ENFPs tend to be great at mirroring others’ emotions (F7) but not actually feeling it themselves (PC4), which is more ENFJ and ESFJ…..