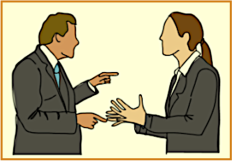 QUOTE: Unexpressed emotions will never die. They are buried alive and will come forth later in uglier ways”.  Sigmund Freud

ISSUES
GREAT DESIRE:
• to be loved  //  to not be attacked // to not be alone or lonely

• of self-reflection //  being abandoned //  being punished

PAY-OFFS for using defenses (ie. Negative Benefits)
1. False Weakness (see Original LL)
a. Avoid facing childhood pain
• Connecting with the pain of past & current emotional injuries makes us feel vulnerable, out of control, small & helpless. Anger is energizing – but not allowed – so we end up in constant anxiety, & don’t know why

b. Create physical pain (real or not), as substitute for #a.
• If we’re workaholic (do, do, do) and not allowed to rest / relax / have fun, we can get sick to slow us down
• If we’re not allowed empathy, sympathy, emotional support…. then physical ailments become a way to elicit some of it ‘legitimately’, since

they are tangible & considered acceptable, while emotional hurts can’t be seen & are often considered a weakness
• If we’re not allowed to be/feel taken care of or to find the right kind of help, practically or psychologically, then being weak, sick, incapacitated…. can get us some attention

c. Continue being mistreated & abused
• Some of us are so used to being in the victim role – which we really were as kids – that we don’t want to give it up as adults, because it would create separation anxiety from the family & our bad-parent Introject.
Being a victim is about the ‘poor MEs’, staying emotionally immature, waiting to be taken care of. While there is a lot of anger under this position, it’s not supposed to show!

d. Get approval for a role
STOIC: 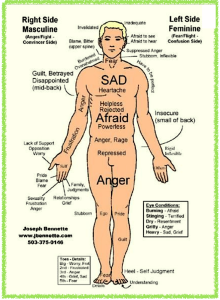 Not letting ourselves experience & deal with jealousy, anger, sadness, fear…. is considered ‘strong’, & gently admired in many parts of our society, including the religious community.  They tells us it’s not OK (weak or un-spiritual) to admit to or show unpleasant ‘negative’ emotions, especially anger. It’s called  ‘loosing it, being emotional’. We’re even told that all emotions ‘cloud our judgment’.
Unfortunately obeying these dictates is harmful both physically & psychologically   (CHART)

DOORMAT: Being such a ‘nice’ person that you have no opinions or boundaries may make it easier on some people to be around us – especially narcissists – & superficially satisfies our WIC’s desperation to never be abandoned by others, but it insures that we abandon ourselves  (MORE….”Recovering Doormat”)

b. Controlling
• Emotional blackmail, to keep others fearful, attached to us
• Demand our own way (always) – ‘nice’ is only superficial
• Destroy ‘loved ones’  – if they try to be free, happy, themselves

NEXT: SYMPTOMS of Hidden Anger (#1)