Skip to content
HomeWhat to DO when CONFUSED (Part 1) 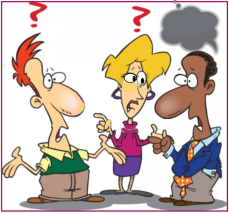 REVIEW – See posts: “ACoAs & Confusion”
This type of confusion is not due to mental or physical diseases (brain damage, Alzhiemers, psychosis, depression…..)

DEF: Any time we have trouble sorting out 2 or more conflicting / opposing : points of view, rules, options, desires, experiences, needs.
Being torn between the facts as we know them AND a resolution we can’t see or find, (being sure about the facts) because we don’t understand our environment.

Can be caused by:
• getting too much information at the same time
• learnin

g something new, & not knowing how yet (this or that?)
• absolutely not understanding some info, communication, instruction, expectation…
• not knowing what to do because of —
– having too many desirable options, but can’t do them all
– not allowed (internally) to admit what you really want to do
– not knowing yourself well enough, & so – afraid to make the wrong choice & then have regrets

EMOTIONS (Es)
You’re confused about how you feel – emotionally. You wonder :
= “Am I angry or scared? I shouldn’t be upset about the way that clerk talked to me, like I was dumb, but I am upset about having such a strong reaction…..

= I’m feeling sad & relieved at the same time about the breakup. Am I crazy?”…..
NO – not crazy, it’s just normal human complexity. Having a variety, even simultaneous contradictory Es is common, especially when considering that each Ego State has it’s own & they often disagree

EXP: Carla came to the party on her own, & wondering who all these people were. After a while she found herself talking with 2 older out-of-town business men, obviously colleagues & obviously married. They were charming, friendly & amusing – telling funny ‘war stories’  & how they’ve helped each other at work. Carla was having a good time laughing with them, genuinely enjoying their company.

At the same time, she felt sad inside, & checking with her inner child, “Little C” said she was sad because then the party was over she’d be going home alone & missing the fun!”

COMMUNICATION
WORST – severe Narcissists are dangerously confusing. They’ll crush any attempt you (target/victim) may make to figure out their agenda – to keep you constantly walking on eggshells, emotionally off balance & mentally confused (feeling crazy). Narcissists always need to be in control of every situation, & react accordingly to keep you in line

SECOND: those who knowingly leave out important info about themselves – that you need to know (married man, ex-con, addict….), or crucial info about a situation they’re in

OTHES Confusers – so you never know where they stand, where you stand with them, what they want….. They’re the ones who:
– talk a lot, but never say anything of substance (shallow)
– sound like they’re trying to tell you something – especially when upset – but just beat around the bush & never get to their point
– only respond in non-sequiturs that have nothing to do with what you’re saying
– lecture, pontificate…with no emotional content
(11 Posts: ‘ACoAs & Confusion‘)

LANGUAGE (T)
Most people are sloppy in their use of words & phrases, causing much confusion. (See post “Sayings that Misrepresent“)

❎ The most common is the word -FEEL- to mean 3 different states – physical, emotional & mental .(See post “Feelings aren’t facts”
• Repeating words they don’t know the actual meaning of (co-dependent, introvert – when they mean shy…. )
• Using a word that sounds like another but with totally different meaning (flamingo instead of flamenco)

• Misusing words (that’s schizophrenic, your crazy, pathological… ) when we’re angry at someone
• Vague words, usually about some emotional state, but unspecified (upset, triggered, off, out of it, acting weird, not themselves…. ).
Is the person unusually angry, sad, scared, nervous, withdrawn, unusually angry,

• Using this word as a pejorative, “Don’t be so emotional, women are too emotional…” by which someone means they’re angry or crying.
BUT emotions come in a wide range of colors.
Why can’t “they’re being emotional” also mean “they’re so excited, thrilled, happy-shocked….!” ?? And yes, maybe even crying a little!