CAN PROTECT MYSELF
in healthy adult ways

SITEs: Empath as Scapegoat in Group Dynamics
• Being a Corporate Scapegoat (cover-ups)

BOOK: Puttin’ Cologne on the Rickshaw, ~William Bouffard, re. Scapegoat Mechanism at work

TO WORK ON (cont.)
BUSINESS – & Relationships in general
Re. Others
A key to not being scapegoated at work is to “stick with the winners”! which means changing our behavior. Healthier people have fewer or milder buttons, & so are more patient with us when we (accidentally) step on their toes.
Pay attention to each person you’re around. What’s their usual m.o. – pleasant or unpleasant, sane or crazy, realistic or in denial, sober or addicted, connected or narcissistic …..?

Positive people to stick with: Those who are generally cheerful, discreet, encouraging, friendly, forgiving, loyal, & with good boundaries 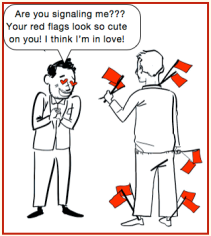 want to be a victim of nor take on:
– Overly controlling, always judgmental, critical, know-it-all, bossy
– Talking ‘at’ you, generally intimidating
– Making fun of you or others, gossips, clicky….
– Always complaining about others or the job, without doing anything to improve themselves or the situation
– Only talking about themselves, endlessly

Such types make us anxious or angry. The longer we’re around them the more it harms us. We’re so used to it from childhood we put up with it. But now we don’t have to!

Re. Our Behavior – at work & anywhere
• Don’t complain about stuff so much: politics, social deterioration, your crazy family, the weather… whatever! Emotionally upsetting things belong in therapy, church, Program…..
AND do not use friendships or romantic partners for therapy. Work on your issues with a trained therapist who knows ACoA issues, & in Al-Anon, ACA, CODA

• DO NOT make fun of or belittle yourself – ever! It’s OK to laugh at our imperfection – not taking ourselves so seriously – as long as it’s NOT from S-H! Denigrating ourselves or letting others do it signals low self-esteem, giving unhealthy people ‘permission’ to disrespect us

• Stop being a “truth-teller” (tattling) unless you need help from an authority figure to stop being abused
• Don’t use feeling terms at work (that’s upsetting, I’m frustrated, angry….). INSTEAD – talk about what you would like to see or do, & make practical suggestions

• Don’t attach to a new acquaintance too quickly or easily. Listen for cues about who they are, so you know if they’re safe or not. That takes time
• Don’t assume everyone’s trustworthy. It’s naive to think everyone usually takes the high road. It’s our narcissism to think others will or should act & feel the way we do

• Don’t trust most people with your secrets, which can lead to betrayal. Be friendly, have fun, but don’t expect others to honor confidences. Secrets are always juicy & some people can’t resist sharing them, while others will use them against you, from jealousy or meanness

• Don’t stay a Scapegoat – work on shedding the “Victim Mentality.” Find & hang on to what’s positive in your life, so you can enjoy them.

RESPONDING to a Scapegoater
Manager: Jill, I need those sales figures to complete my analysis
Scapegoater Boss: Why didn’t you tell me this sooner?
M: Check out the email I sent you last Friday 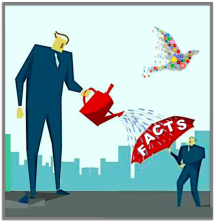 Sc: I never got it. Blame our server, not me
M: Our system shows that you received & saved the email

Sc: Oh, those figures. I told Bryan to do them. You mean he hasn’t gotten them to you yet? What’s wrong with that guy?
M: Bryan been working on the account for the past month
Sc: Well … (To herself: “Who can I blame now?”)

NOTE: The Scapegoater will stop blaming – temporarily – if given very specific examples of how their mistakes or miscalculations are the real problem. Being direct & clear makes it harder for them to shift blame.

NEXT: Sayings that Misrepresent #1