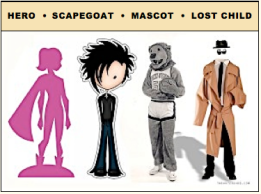 I KNOW WHAT IS EXPECTED – my Role tells me!

1. ADULT Roles (Part 2)
2a. ACoAs – as CHILDREN
• the eldest boy or eldest girl is usually the Hero or Placater, who is aligned with the non-drinking parent (if there is one)
• the next child becomes the Scapegoat, identifying with the active addict
• The Lost Child 3rd or middle one, & is mostly ignored (3rd wheel)
• the Mascot is last, who tries to keeps things light

Just as there are shifts in any living system, the way roles are assigned, clumped together or reassigned changes over the years of a family’s life.  Toxic Family Roles (TFRs) themselves stay the same no matter who they’re stuck on to, but can overlap or be passed on, like a deadly virus! These severely limiting, false personae are taken on by each child, in one of several ways. If there are fewer or more children, roles double up:

a. For an only child, all 5 roles** weigh on them, with one often being dominant, so one CoA may become mainly Lost Child while another may be mainly Mascot…. Not having siblings to share the roles, this child (& later as adult) can experience rapid cycling of moods which can be scary, confusing & sometimes mistaken for manic-depression.

** What may seem like ‘being crazy’ – especially under stress – is actually an automatic shift from one Role to another in quick succession – Hero / Placater to Mascot to Scapegoat to Lost Child & back again – with the mental & emotional perspective of each suddenly coming to the foreground & then being replaced.
If there is no obvious medical condition, this switching can be understood rather than feared, & can even be used as a temporary coping skill until Recovery brings out the True Self

b. If there are only 2 kids, each takes on more than one role, depending on gender, birth order & personality.  In this case each child can still have one dominant Role, but can switch into another when dealing with different types of people.  So a child with a primary Role of Hero (1st born), with Scapegoat & Lost Child as sub-roles, can act out the Scapegoat when someone pushes them too far, or withdraw as Lost Child when being mistreated in some way.

•  The Hero (usually the oldest) is required to be perfect at all times – to know everything, never make mistakes, always look good….. This is enormous pressure.  When the ‘job’ gets to be too much this child may say or do something inappropriate, outrageous or illegal to relieve the stress of perfectionism. It is both a rebellion & a cry for help, but will only garner punishment & a demand for a return to Hero status.

The other child may be Mascot & Lost Child, & sometimes will take on the Hero / Placater role when the older sibling has left home or is incapacitated – OR when running their own household as an adult.

c. With 3 or more – there are still some overlaps. When an older child leaves home (usually the Hero going off to school, work or war) anther sib takes over, which means someone else has to double up, with even more stress.

NEXT: Part 4 – ACoAs as Adults