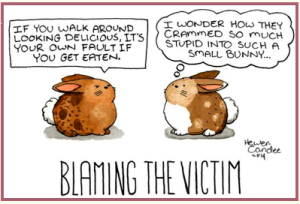 TO BLAME OR NOT TO BLAME
is that the right question?

NOTE: Emphasis is on this ‘flaw’ being used on a consistent basis

SET UP: In everyday life outside events trigger us to respond.

When we act, we then decide if our response got us what we wanted.
Normal FLOW is always 2-way: Red light <–> Stop <–> Be safe.

BUT – what if our action didn’t produce the desired result?

BLAME – In general: to assign responsibility for having a fault, for doing something wrong, or for causing someone’s pain. Used correctly, it’s a way to hold oneself or others accountable.
ALSO: It can make a negative statements about a person or group, saying that their action/s are socially or morally irresponsible – and therefore bad. It’s the opposite of praise.

BLAMERS’ ‘REALITY’ is based on over-emphasizing themselves, using a one directional cause-&-effect

The only things in life that seem to register as blips on their ego-screen are those that effect themselves & their emotions – good or bad – which they use to justify unhealthy actions. (MORE….)

Because of this self-centered focus (narcissistic), habitual blamers either don’t notice or don’t care about the negative effect their words & actions have on others, or how they’re coming across (arrogant, stupid, outrageous…..).
Since their view of reality feels normal & logical to them – they don’t recognize the pattern as dysfunctional.
CHART :
• The core belief of the blamer is based on their own S-H & shame – that they’re wrong, bad, not deserving of care / respect / help….
• Their emotion is rage at the unfairness of all their experiences. Under that is fear, loneliness, hopelessness….
• The desire (as compensation) is for everything to go their way, regardless of what’s real & possible, ignoring that others also have needs which may be different from their own

This combination (belief-emotion-desire) results in the blamer-‘victim’ insistence that bad outcomes are always someone or something else’s fault. They’re dedicated to protecting the illusion that the world is against them.
It reinforces their ‘position’ —
• that they had nothing to do with things going wrong (running across the street against a red light, staying in a damaging relationship….)
• that they should not have to cope with adversity (don’t know how to self-soothe & don’t want to, anyway)
• that it’s NOT up to them to make things better

🚫 ACoAs who habitually use blame as a defense hold ourselves & others responsible for our life problems & emotional unhappiness – everyone except our family!
It’s a way of never having to look at one’s own self-defeating beliefs & life patterns – to avoid doing the hard work of growing & changing.

• But underneath, chronic blaming is also a way of expressing ACoAs’ sense of powerlessness – convinced we’re unable (not allowed) to get our needs met. So we rely on others to make up for & provide us with all the things our parents couldn’t or didn’t want to.
Then we can accuse people of letting us down – when they ‘don’t come thru’ – even though what we’re expecting from them is totally unrealistic & inappropriate!
<— IMAGE: The Al-

Anon handshake: one finger pointed at another, BUT 3 pointing back at ourselves.

CRUCIAL: When considering this character defect, it only applies to adults, not children. Also, there’s a difference what’s ‘legitimate’ finger-pointing, & what’s not.
Legit’ blame (assigning responsibility), is on behalf of Children:
parents & other adults ARE answerable for the pain they caused us growing up – whether they had a choice to do so or not (physical & emotional abusive, or abandonment because of mental illness, divorce, death…).

Not Legit’ blaming OTHER adults, or about any group: Only the unhealthy parts of us indulges in this attitude.  Blamers look at everything that happens to them in the world thru the internal filter of their WIC (excitement or abandonment), but react externally from their PP (superiority or finger-shaking). And both filters can be well-hidden until something doesn’t work out for the covert blamer.