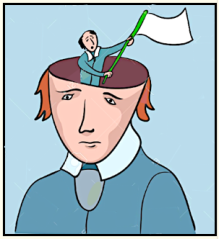 I HAVE TO GIVE IN
or I won’t be liked!

REBELLION
2. UNHEALTHY (cont)
b. Over-coerced (cont.)
✶ Our reaction
THEN: For ACoAs in this group, being rebellious or resistant was an attempt to hang on to a fragile developing identity, in the face of our parents’ active, daily effort to obliterate it.
It was a desperate effort to resist ‘psychic murder’. As long as we were living with our family, this defense was a necessary & partially successful boundary. survival technique

NOW: Many ACoAs from this background will become the overtly Rebellious type – at work, in relationships, everywhere.
In this case the rage at our abuse is obvious. It’s the WIC’s p

owerlessness – ineffectual at actually making any changes for the better – in childhood.

But the reality of not originally having had an effect on the environment created a double bind, namely:
“I can’t have an effect and I must have an effect.” This often leads us to socially unacceptable behavior, sometimes ending in trouble with a variety of authority figures.

These ACoAs are more likely to be:
• counter-phobic (acting like nothings scares them, & believing it)
• oppositional (needing to say NO to almost everything they didn’t think of themselves, often saying “Yes, but…”)

• in a relationship where they’re aggressive, controlling, even the rescuing one – to feel powerful

Ultimately being rebellious is not a successful or appropriate adaptation for most careers or relationships. The whole world is not like our family – only the part that we’re attracted to or are able to ‘see’ – in order to continue relating to others in a familiar way – called the ‘repetition compulsion’.

COMPLIANCE
This is the opposite extreme defense – used also to protect oneself from psychic murder, & from ongoing mental, physical  &/or sexual abuse.

THEN: It looks like these ACoAs totally agreed with their parents & never tried to stand up for their own opinion & needs. Not doing so was imperative in many households, because to have had any individuality (like objecting to the abuse, or identifying the ‘elephant in the living room’) was so severely punished. These children had to be ‘good’ to just survive.

EXP: Think of Marvin Gaye, who as an adult finally stood up to his alcoholic father – to stop him from beating his mother. His father’s response: he murdered Marvin in his sleep!

NOW: This compliance as adults may look like the passive resistance of rebellion, but there is a difference. These ACoAs :
• hide their rage under either cuteness & humor, or sullen withdrawal
• are often in a relationship with a bully &/or control freak
• look to others to tell them what to do & who to be
• may complain endlessly about being abused, but won’t risk a change
• are the ‘invisible’ ones around us, fading into the background
• have a greater tendency to severe depression, physical illness & suicide attempts than other types
• some can be pushed to the wall & then explode, but rarely

EXP: One compliant woman stayed married to a controlling bully for over 30 yrs. Everyone, including her kids, told her to leave but she never would. When he husband finally died, her friends thought: “Finally, she’s free. She can have a life of her own for the first time.” Wrong. She died within a year of being widowed!

• On the surface, this defensive style may result in lessening friction in the world, BUT is not respected by most people AND will cause the compliant one to slowly die inside. (Posts:“Secretly Angry NICE

RECOVERY
• It’s important to remember that these are DEFENSES, not our real personality, no matter how much it feels like it!

✶ BOTH styles are being run by the WIC in reaction – first to the original family – & now to the internalized Negative Introject.

✶✶ But much healing can be achieved to counter these defenses, with love, patience & the right kind of info.
(Posts: “My Rights // S& I – Healthy individuation“)