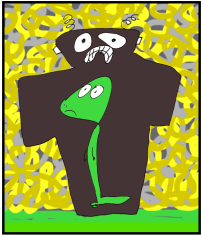 SITE: Cognitive Distortions & PTSD    (Robot + Dinosaur)
⬅️ Heidi Hanson – artist, writer, PTSD survivor says the Mental Software Program in the psychological “Robot Suit” – usually in total control – is everything in us that hinges on irrational beliefs about Self, other or the world. It’s made up of voices that behave like a robot, programmed to repeat each line over & over….. It’ll never let go because that’s what it was told to do. Then our emotional responses are also automatic.

4. SHORT VERSION of CDs
1. ALL or NOTHING THINKING (Splitting)
Always see things in black/white, either/or categories

3. OVER-GENERALIZATION
Take isolated cases & use them to explain everything. EXP: see a single negative as a never-ending pattern of defeat

4. DELUSION
Holding a fixed false belief, in spite of overwhelming evidence to the contrary. EXP: believe you’re obese when you only weigh 100 pounds

Continually de-emphasize or put down good / pleasant experiences, rejecting the positive ones by insisting they don’t count

6. EMOTIONAL REASONING
Make decisions or arguments based on false ‘intuition’ or some emotional feeling, rather than on objective evidence or realistic evaluation

7. ENTITLEMENT
Convinced the same rules for others should not apply to you. EXP: believe you shouldn’t need to do an internship even if that’s the normal path to employment in your industry

8. JUMPING to CONCLUSIONS
Make a negative interpretation of an event, even though there are no facts that convincingly support your conclusion
a. Mind Reading – Arbitrarily assume someone’s reacting to / talking or thinking about you negatively, without checking it out with them
b. Fortune Telling – Anticipate that things will turn out badly, & are convinced that what you ‘perceive/ feel’ is absolutely right

Distort the importance of qualities / aspects of a situation or your memory -by making it more OR less than the experience really was, so that it no longer corresponds to reality.
• Depressives – tend to over-estimate the value & under-play the faults of others
• Catastrophizing – think a situation is unbearable when it’s actually just uncomfortable, or
– exaggerate the situation, then obsess about the worst possible outcome of the event, however unlikely

11. MIND READING
Assume you know (guess) what someone else is thinking – usually about you, when it not likely they’re thinking that at all

12. MENTAL FILTERING
Focus on specific negative or upsetting parts of an event, while ignoring other actually available positive ones

13. OVER-GENERALIZATION
Use an isolated cases to explain everything in the same or similar category. EXP: see a single negative outcome as a never-ending, inevitable pattern of defeat

14. PERSONALIZATION
Seeing oneself as the cause of some negative external event  that one has or had no control over (someone’s death, illness….) & therefore absolutely cannot be responsible for

15. ‘SHOULD’ STATEMENTS
Trying to moti

vate oneself with words like ‘should, shouldn’t, must, ought, need to, have to’, as if having to whip oneself into action would work
a. When using this on oneself, the underlying emotion is usually guilt
b. When using it on others, it will often be anger, frustration & resentment, possibly oppositionalism

16. UNRELENTING STANDARDS
The belief that implementing high standards is imperative to avoid catastrophes. EXP: making any mistake will lead your boss to think you’re totally useless

GROWTH
✧ The deeper layer under our CDs is the accumulated emotional abandonment pain from childhood – intense disappointment & frustration, loneliness, rage, sadness, shame, terror….
These are stored in our muscles, cells, organs, meridians… & need to be processed out through a variety of techniques, includes rage-work, primal therapy, brain-repatternig…

✧ Present day painful emotions are also generated & maintained by obeying CDs.  But all of Recovery is geared to making the needed correction.