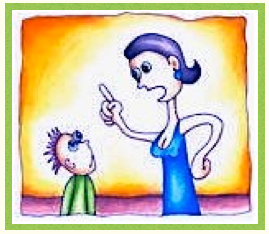 IF IT WEREN’T FOR YOU….
everything would be OK!

2. BLAMERS (B) – a Twisted form of Power
STYLE :  about 30% of people use this defense. They say NO, regardless of what they really feel or want (it’s the principle of it!)
THEY
• act like they’re superior & make disparaging comparisons
• always think they’re right, & never respect others’ point of view
• are dictatorial, loud, tyrannical & expect everyone to obey them
• bully, shove their thoughts & feelings at others, are more likely to initiate conflict
THEY
• constantly find fault & point out problems or weaknesses in others (sometimes called ‘skunks’ in NLP because they ‘spray’ criticizing language)
• push responsibility for everything onto others, always looking for someone to take the blame when things go wrong, hinting that others ‘are in trouble’

• their attitude is oppressive, which can trigger Placating in others out of fear (EXP: when giving a speech they’re harsh to make firm points & elicit guilt)
THEY
• think no one will accept their view of the world unless they yell
• use authoritarian & direct language, with generalizations, to distract & assign blame
• use complex comparisons & missing proofs to confuse
• want to win at any cost, sometimes will “cut off their nose to spite their face” or win the battle only to lose the war

• no matter how someone replies to their accusations, Blamers will use it to make the other person even more wrong, using a double-bind with a mismatched response (EXP: if you stand up for yourself, you’re arrogant, if you back down you’re a wimp!)

• Potential harm to receiver: if a person is in a weakened state, Blaming makes them vulnerable to outside negative energies, crating terror & depression
• this receiver will experience varying amounts of pain if they can’t block or shield themselves from the Blamer’s targeting – which can create holes, tears, shattering or disruptions in their energy field, blocking or shutting down the chakras & stop energy flow in the meridians

B Stance: They use visual cues with breathing, posture & gestures
• body square on, legs apart, head slightly down, tightened neck muscles, leaning forward a bit
• face is screwed up, lips curled, nostrils flared, eyebrows lowered
• one hand on hip, other hand with raised finger & palm down, pointing directly at another for strong effect (an attack), or at the ceiling (a warning of attack).
• internal tightness of muscles & organs, with increased blood pressure (see Chart in “What about Es, #1“)

Bs Gain Power: by their guilt-producing ability & belittling others, as

when the Sender of blame uses force to convey a mental / psychological message, and the Receiver acknowledges & accepts the message
Aim: to dominate so they’ll be obeyed, & provoke fear so they’ll be ‘respected’

Reacting to a Blamer: (via NLP) If you use a Placater stance with them it can shift their attention from their own attitude & context, to your view & your context.
Be careful: it can also trigger an even stronger Blamer response from them, if they get annoyed at you for being gutless (according to them)

Reality: Blamers hide behind a tough mask of invulnerability, but actually feel powerless, uncared-for & alone in the world with no one to help.
When stressed, they compensate by taking charge, bluff their way out, attacking & controlling. This attitude temporarily makes them feel better – when people obey, they feels effective & powerful
Negative Result : they usually end up alone, since nobody wants to be at the receiving end of their blaming, harshness & over-control