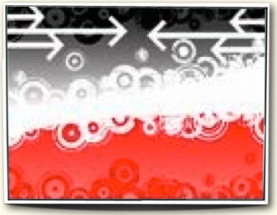 I CAN’T SAY NO TO ANYONE
so they won’t get mad, or worse – leave me!

THRIVERS
People who were brought up in a relatively healthy home have what’s called a ‘cohesive or integrated self’, based on consistent, good-enough parenting. They got enough of their needs met early on, which gave them a strong psychological foundation in the form of the internalized Good Introject.
Thrivers have good personal boundaries (Bs) that are self-protective but still allow them to be sensitive to the needs of others, making them open to giving & receiving nurture in relationships.
(MORE: read excerpts from: “The Reciprocating Self…“

Healthy Bs  can be illustrated as a circle of our personal space – that has gaps, so we’re not walled in – but with a door at each opening, which WE are in control of.

Weak Bs (blue) have those same gaps in our personal space BUT without any doors, so the openings indiscriminately let in useful, neutral or damaging experiences.
EXP: We’re available to absorb the negative, poisonous energy of constant complainers & blames. ALSO – it makes it easy for others to get under our skin or stomp on us!

In contrast to Thrivers, no matter how we were wounded – ACoAs ended up with either :
i. a ‘vulnerable self’ & weak boundaries.  These are easily hurt by people, places & things (PPT), as well as noticeably needy, actively looking to be taken care of by others because of poisonous internal resources (Toxic Introject).  The most wounded ACoAs have:

ii. a ‘fractured self’, subjected to such severely bad parenting that they have almost no internal resources (no strength, resilience, esteem, empowerment, hope…), who are truly fragile, with no Bs, & so desperate that they cling, whine, complain, ‘suffer’… OR come across as demanding, controlling & rageful, cruel….

• Since boundaries are not inborn, the way we were raised determines the state of our self-protective mechanism as adults. Weak Bs, also called diffuse, are a common result of a damaged childhood – when parents treated us as property, or an extension of themselves, or annoying pest to be swatted away.

They were over-controlling, sexually abusive, neglectful or attacking, using us as a substitute spouse or substitute parent (role reversal)…, while they disowned or tried to crush the Real us!
Whether totally oblivious, OR too involved in our lives in wrong ways, never leaving us alone — it was extremely hard for us to define who we are.

• This family symbiosis shows up as: members who ‘understand’, accommodate & over-tolerate bad behavior (spouse – of the drinker / rager…  children – of sick, abusive parents….), making them increasingly dependent on each other at the expense of outside relationships.

In some cases the understanding becomes a twisted form of empathy, so that members ‘feel’ each others’ thoughts & emotions, wishes & needs – especially their suffering.  This kind of empathy is unhealthy, preventing the children from having their own separate thoughts & emotions, AND from getting the comfort, understanding & help they need to develop normally. It stifles personal growth & independence, insuring that outsiders are excluded from having meaningful relationships with anyone within the family.

• Remember the Co-dependent triangle? When we’re in our Victim Role we have weak Bs, so

when anyone disrespects an important boundary of ours we feel discounted, hurt, oppressed, ignored, abused, or taken advantage of.
The Victim’s slogan is “poor me!”, yet we perpetuate it by staying with emotionally unavailable Persecutors & Rescuers, trying to get the love & attention we desperately need but don’t feel we deserve. At the same time we may also turn into Perpetrators by imposing ourselves on others! & then rage when we become too frustrated with anyone who’s not capable of satisfying our demands.