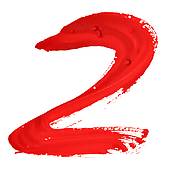 I JUST WANT TO BE LIKED
so let me help you!

HEALTHY 2s: Human welfare causes are very important to me.
The Humanitarian: You are altruistic, appreciative, caring, considerate, compassionate, empathetic, encouraging,generous, inter-personal, kind & warm-hearted.
● Altruism overcomes the 2’s flaw of Pride (in their ability to help/love), helping you fulfill your own needs & become more self-aware. You highly value service and making connections, are able to love unconditionally, see the bigger picture & want to make a difference in the world – not just with loved ones. Others feel supported and cared for. 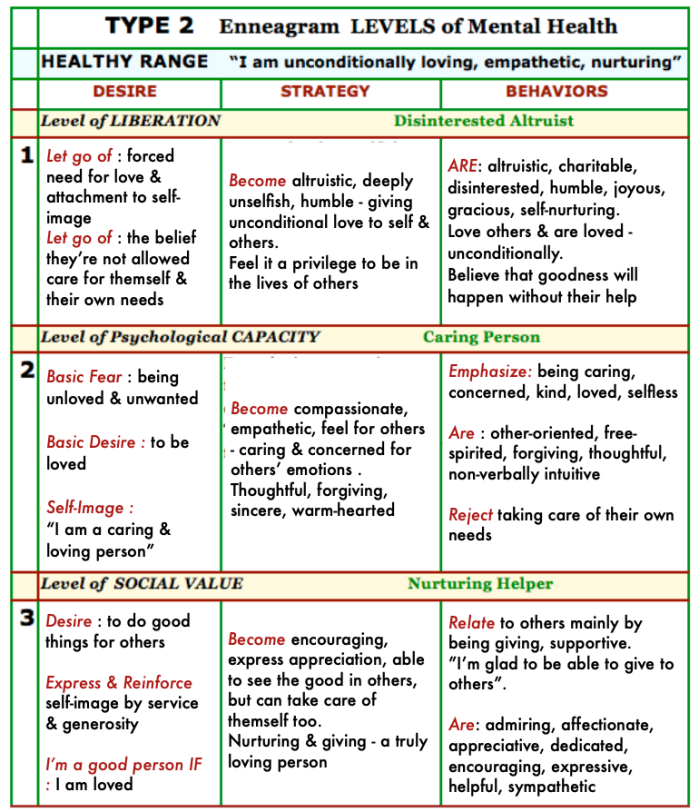 AVERAGE 2s: I put the needs of others ahead of my own.
The Helper: You’re caring & considerate, sensitive to the needs of others – particularly loved ones, BUT often intrusive, interfering & meddlesome, even overbearing – in the name of “just trying to help”,
● You want freedom (from pain) & self-determination. But this desire is corrupted into freeing others instead of yourself, but this effort is an illusion. You’re giving – but selfishly – expecting a return, are emotionally demonstrative / overly friendly, do more talking than helping, have ‘good intentions’. You need to be needed, want others to depend on you, send double message, so people may feel ‘conned’ because your flattery can seem insincere (it’s just ‘too much’). 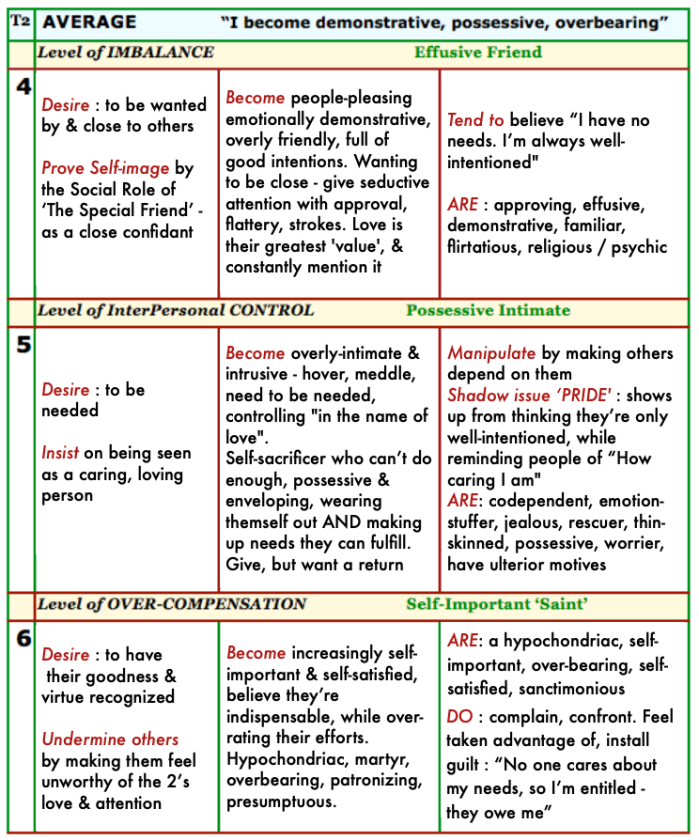 UNHEALTHY 2s: I will sacrifice myself for others.
The Martyr: You’re out of touch with your own needs, have no identity beyond your closest relationships & will unravel if you lose them. This makes you intrusive, giving-to-get (strings attached), manipulative & possessive. You become domineering, actually subverting your true goal of being helpful. Use guilt about how much you’re suffered, while excusing & rationalizing when you act badly, from rage at being abused & victimized. 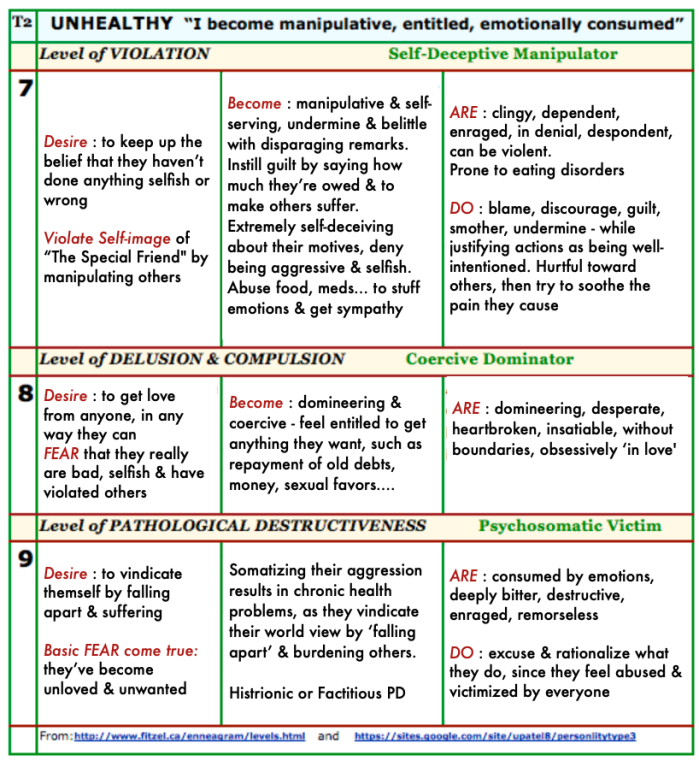 INTEGRATION (Loops)
Healthy loop: The Basic Desire of ‘Needing to be loved’ pushes 2s to help others – 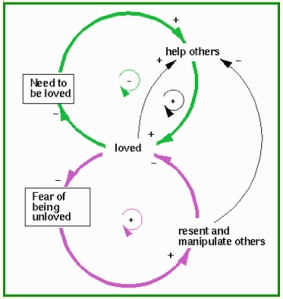 appropriately, which makes them loved, so the need is satisfied and balance is reached.

Average state: 2s rescue instead of help, so they don’t feel loved, causing the need to increase. If 2s to learn how to love correctly, balance is created.

Unhealthy loop is run by Basic Fear of ‘being unloved’, which can make 2s resentful & try to manipulate others into loving them. This tends to make people love them even less, further increasing 2s’ basic fear & preventing balance.

At this level 2s can be effective leaders, but may place themselves as the power behind the throne, which keeps them from having to deal personally with hostility or rejection. 2s are sometimes referred to as ‘servant leaders’ who reverse the traditional structure of organizations, so that everyone serves the front-line staff who deal directly with the public.
THEY:
— are very concerned with image
— align with powerful key figures
— put emphasis on identifying needs & fulfilling them
— are focused on people. They lead by empowering, engaging & inspiring
— are interested in developing key people & relationships
— tend to allow or promote an ‘in group’, with the inevitable ‘out group’ who is ignored by the 2
— measure their success by their effect on employees & customers

SUPERVISING Average Type 2 WORKERS
Never take 2s for granted – give them genuine appreciative comments for work well-done. Their love of connections with others does not mean disloyalty to the boss. They’ll jump to implement a half-baked business idea the boss is tossing around, thinking to get praise for their usefulness, but instead get in trouble. So be clear about what you want & don’t want done
THEY:
— prefer dealing with others face-to-face
— seek approval by always trying to be helpful
— need to be appreciated, otherwise may ‘go on strike’ (stop helping)
— place a high priority on having their emotional needs met
— want to be attractive to others, so at this level are people-pleasers
— either love or hate others, depending on how they’re treated
— need strong guidance at the beginning of a project, but once on their feet they perform well
(From: Global Leadership Foundation)
NEXT: Type 3 level

IT’S PAINFUL TO SEE
who I grew up with!

PREVIOUS: Levels of Development – part 3b

At Level 7, believing that life has violated us, we become so desperate to get our needs met that it

leads to terrifying behavior – we’re willing to harm ourselves & others, causing serious conflict & damage. We see ourselves as victims, which allows us to justify any offensive or abusive action.
● We tend to over-indulge in anything we think will eliminate our pain (food/drug/alcohol abuse, sex, exercise, self-cutting…), but since they’re just an escape from dealing with reality, they causes more suffering.
● We get highly dogmatic, intolerant, inflexible, self-righteous & very
judgmental. Tend to deal in absolutes, as if only we know “The Truth” & everyone else is wrong, while rationalizing our own destructive actions.
* * * *
LEVEL 8: Delusion & Compulsion
External Behaviors – We are erratic, sinister. They repel others & have chronic insomnia. Can become delirious, may hallucinate, project
Internal Attitudes – We are horrified, nauseous, manic-depressive, overheated, with weird perceptions. We distort reality, resist all help, become schizoid (withdrawn / separate)

Desire is To – endure / survive our terrors (staring into the abyss) 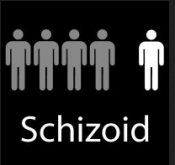 At Level 8 – Become obsessive about imperfection and the wrong-doing of others, although we may fall into those very actions, hypocritically doing the opposite of what we preach.

Desire is To – leave “reality”, to eliminate all sensory input, to break away from any awareness 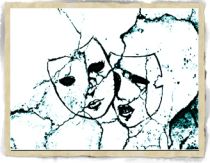 Basic Fear of this Level – The basic fear comes true: we are helpless, incapable & useless

At Level 9 we condemn everyone, becoming punishing & cruel – to rid ourselves of “wrong-doers.” Severe depression, a nervous breakdown & suicide attempts are likely. Generally corresponds to the Obsessive-Compulsive and Depressive personality disorders.

* * * * * *
EXP: TYPE 5 person’s disintegration (re. school-shooting)
“On December 14, 2012, Adam Lanza killed his mother, drove her car to Sandy Hook Elementary school where he gunned down 20 children and 7 adults before taking his own life.

It seems that Adam was a typical Enneagram #5 – highly intelligent, socially withdrawn with an inability to emotionally express himself.
• Pent up anger awaits a trigger.  Any Type follows a certain pattern as they deteriorate & Fives decide they need less and less of everything, including food, clothing, hygiene. They tend to become reductionists and worse, nihilists….”(MORE…..by Marcel Elfers) 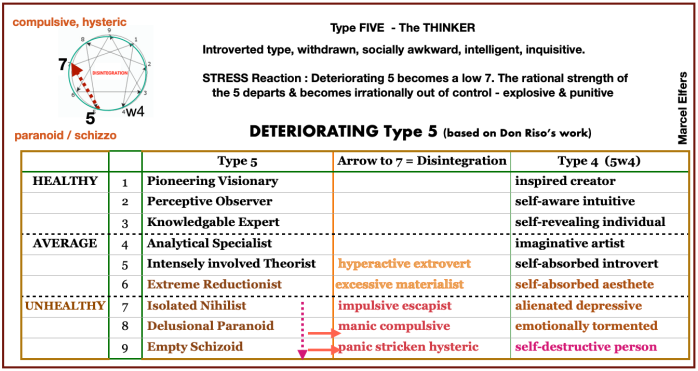 NEXT : Levels of Development – part 4 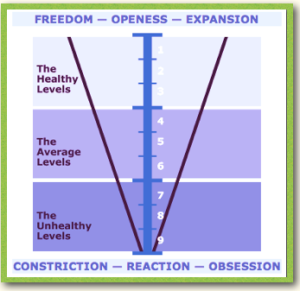 I’M AFRAID TO FIND OUT
what level I’m at!

Psychological LEVELS
Each of the nine Enneagram Types contains its own 9 levels/stages of possible psychological development, (don’t confuse Types & Levels), starting at the bottom: from the most destructive (level 9) to the healthiest (level 1) – see chart above. This categorization was developed by Don Riso in 1977, added to by Russ Hudson & used by Ken Wilber in the study of personal & cultural evolution.

● The Levels are a way of picturing the “skeletal” structure of each Type,
& account for differences between people of the same Number, as well as the shifts we see in ourselves & others over time. Moving upward on the scale means we become less bound by the limiting defense mechanisms of our type, to become truer to our Real Self, to be more present in the moment. Moving downward sinks us deeper into damage, increasing our distance from objective reality.

• Unless we know each Type well there can be confusion in identifying someone. People of the same Number may seem quite different from each other when coming from differing levels of mental / emotional health. And different Types can seem deceptively similar, depending on which stage they’re in. To identifying anyone correctly, the thing to focus on is the Passion, and listen 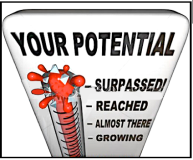 ing to the way each type used language helps too.

● These stages are NOT fixed. The Level we act from can change even in the course of a day, based on feeling peaceful or stressed – usually to the one above or below our ‘normal’ level. Because levels are (potentially) fluid, it’s perfectly normal to do this depending on the situation.
— Anyone working on self-improvement will be able to move up one or two on a more permanent basis, with great effort, but most commonly we migrate from lower to higher & back down again throughout our life, while the majority stay in the mid range 4 to 6

— Very few people achieve level 1, altho some do touch it from time to time, & while they’re likely to slide back down, they usually stay in the 2 to 4 range.
— And no one drops from the uppermost levels to the bottom 3, especially not all at once, unless there is severe physical trauma to the brain, or long-term exposure to severe abuse.
EXP: This is what can happen to a happy well-adjusted child who is forced to endure repeated beatings, verbal assaults &/or sexual abuse, over a long time

OVERVIEW by RANGE: At each level, we use different strategies to reinforce our sense of self / ego-identity. NOTE: ‘ego’ = the created self-image. These divisions apply to everyone, no matter which Type one is.
LEVELs 1-2-3 : Healthy 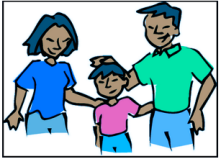 Anyone who in the process of Self-actualizing (not 100% or all the time): high functioning & operating successfully, who can use admire-able / balanced / consistent, reliable ways of thinking & acting. There’s a sense of flow, being fully engaged with the task at hand, moving with little or no friction against the internal & external world.

a. INSIDE: Not strongly identified with their self-image. Are free to express & reinforce their identity, by acting in a manner consistent with the ‘persona’, as well as being able to let go of it when appropriate
b. OUTSIDE: At this level of High Performance, they see other people as valuable in their own right, with unique needs & tastes, separate from themselves, & can balance their needs with those of others.
● High-functioning people have a personality – it doesn’t have them

LEVELs 4, 5 & 6 : Average
Ego-driven people are neurotic but still functional, & can contribute to society, but are limited in 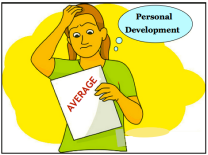 some specific way. They have a mix of productive & energy-sapping patterns.
● In this ‘normal’ range, people are generally self-centered, focused more on image – wanting to be seen in a certain way. They use social roles, manipulation & controlling others to reinforce their sense of self. They interact others mainly in terms of their own needs, with less concern for the needs of others. This can generate resistance & resentment toward them, but they don’t understand why.
● Average-range people believe they are their personality (“It’s just the way I am”)

LEVELs 7, 8 & 9 : Unhealthy
Unhealthy / Pathological people are already – or in the process of being – so out of control that they develop personality disorders such as being obsessive-compulsive, & may eventually lapse into psychosis. There is an increasing sense of ‘spinning their wheels’, heightened internal & external conflict, resistance, difficulties with the public…. 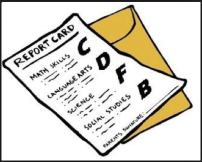 ● In this Acute/Chronic Stress range these people’s focus is so narrowed down to themselves that they can break with reality. Their self-image is completely different from how others see them, since they experience others mainly as objects rather than human beings, putting a great strain on all relationships
● For lower-functioning people, the personality has them & they just act out of it automatically.