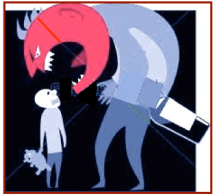 I DIDN’T CAUSE THEM
to pick on me!

SITE: ‘The Scapegoat’ a lengthy description – scroll down

2. Scapegoating FAMILY (cont.)
This torture can & does happen in any size unit, but studies show that the larger the family the more likely one child will be singled out for this toxic role. These homes will be rife with socio-economic, psychological, marital, mental and/or physical stressors. Nerves are usually on edge, & the adults’ energies are stretched to the limit because of frustration & overwhelm.

In such case, a parents may deliberately make home life so unbearable for the Scapegoat (Sc), that the child is left with no

choice but to leave as soon as possible. Many of these throw-aways have little education or marketable skills, ending up homeless, prey to the worst criminal elements, or go into a life of crime themselves just to survive.

HOWEVER, scapegoating families can be from any background, educational or financial level – not just poor or immigrant. A common thread is severe narcissism, co-dependence, alcoholism or other addictions, & scapegoating can continue being perpetrated at home even if one or more members are in a 12-step Program, such as AA!

GOLDEN CHILD vs Scapegoat child is a common divisive ploy set up by a narcissistic parent. In sick families one child will be favored as the ‘good’ one, given special status by the parent who treats them as if he/she is perfect. (References here are to NPD mothers & daughters, but can be applied to any combo)

• At the same time – another child is set up to be the victim (Sc), continually told they’re ‘bad’ – left out or picked on, humiliated & abused. The Sc is forced to care for everyone else, but not allowed any needs of their own.

EXP: A scapegoated woman said, “For years I resented my sister who my mother adored. I wished I had felt special to mom. Now I see how messed up my sister is & I’m glad I wasn’t the favored one after all.”

• The golden child can do no wrong. The scapegoat can do no right. This creates divisions between them, the former having a great investment in the mother being wise & wonderful, in contrast to the Sc who hates her. That division is encouraged & perpetuated by the narcissist with lies & blatant unfairness

EXP:  the narcissistic mother identifies with the golden child, provides them with privileges, as long as they do/ are exactly what she wants  – be her carbon copy. The child’s payoff – at least inside the family – is to be compulsively protected & idealized by everyone, including the Sc, who hides their resentment & envy. 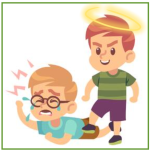 To reciprocate & stay in the parent’s good graces, the favorite will defend the mother by:
• indirectly perpetuating the abuse by finding reasons to blame the scapegoat for the mother’s actions
• or directly taking over the perpetrator’s role by physically abusing the scapegoat so the parent won’t have to do that herself. (MORE….)

Because of inappropriate pampering, the golden one believes they’re worthy of adoration, & therefore entitled.
But being the favorite eventually backfires – because they develop their own pathology.
The NPD parent forms a destructive enmeshment which engulfs the child, perhaps for life. He/She isn’t allowed to h

ave their own identity or boundaries, stays emotionally immature, & often becomes the puppet of a parent-substitutes, such as an abusive spouse.

EXP: In another case, the Favored son couldn’t cope with the abandonment when his wife of 18 yrs finally left him – who he’d battered – so he shot himself in the head, while the Rejected & tortured son became a well-loved minister

• The ‘bad one’ is ultimately the more fortunate – given this scenario. He/She is basically more independent, often driven to seek answers, & eventually may come to understand the nature of the NPD parent – allowing them to outgrow the Sc role. They’re the ones who can break free from their destructive family system to create a healthier life.

2 thoughts on “ACoAs being SCAPEGOATED (Part 2)”