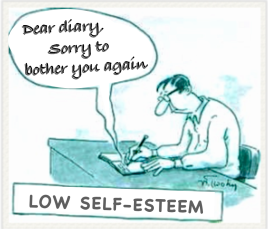 OH NO, I’M AGREEING –
with my Bad Voice (again)

OLD PAIN vs. NEW PAIN
Old Pain (Abandonment) is made up of the daily misery we lived thru as kids, with no way to process or get help dealing with. It accumulated in our body & in our spirit, much of which eventually went underground, into our Shadow (the unconscious).

New Pain (Self-Hate) is the suffering we now do to ourselves & allow** others do to us – acting-out our family’s training. This layer gets added to the old abandon 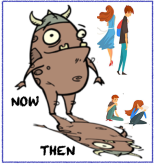 ment & the accumulation wears us into the ground.
**Re. “allow” : Denial makes it hard for us to recognize abuse as it’s happening, so we don’t consciously choose to let others hurt us consciously, but unconsciously gravitate to the familiar – & then stay!

• So it’s important to stay awake for what’s happening to us & around us. Having been exposed to rage, fear, neglect, disrespect, torture …. as kids, ACoAs are both drawn to AND are more deeply affected (badly) by negative people, places & things.

It’s like having an open wound that keeps getting bumped – it’s injured more & more, so it hurt worse, AND never has time to heal. We’re hyper-sensitive to uplifting and deflating energies, & need to stay away from harsh environments even more than ‘normals’ with less damage

EMOTIONAL ABUSE (E.A.)  to Ourselves
Keeping PMES in mind, most people think of abuse only in Physical terms, but our WIC’s damage is first & foremost Emotional. From earliest childhood ACoAs were trained to tolerate abuse in both subtle & blatant forms, which then became our default position. Observe how you Victimize yourself now, in ways that keep wounding your feelings, in order to stop being tortured unnecessarily!

As adults the most violent source of E.A. is our own inner Pig Parent voice, which generates relentless negative beliefs & demands we put on ourselves. Many of our troubles come from the WIC obeying this Introjected part, & not wanting to let go of old ways which represent loyalty to our family system.
Monster : “Self-Hate”, expressed in T.E.A. forms
E.A.: Terror, hopelessness, self-pity, FoA, loneliness, desperation

2. Addictions
Again, most of the focus is on the Physical damage & results we experienced, & not enough stress is put on the Emotional devastation . OUR addictions are specifically designed to repress / suppress painful Es & memories – to silence the PP voice which tortures the WIC!
E.A.: Shame, coming both from our values / conscience/ spiritual beliefs, AND from the immature/ harmful/ crazy things addictions ‘make’ us do. They also encourage S-H, guilt, hopelessness… & abandonment fear

3. Going to the wrong people….
…. to share personal issues, secrets or deep pain with. Their worthless or harmful reactions make us feel worse – betrayed, alone, enraged, hopeless, suicidal. The key point here is that we often go to people we already know from experience are not safe, but refuse to acknowledge it!
We’ve been disrespected, blown off, controlled, told what to do – before– by these people, 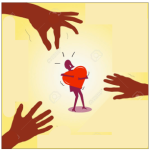 instead of just listening to us & being sympathetic, YET we keep going back!

☀︎ Our denial of past & present reality has turned into self-abuse!
At best those unsafe people are out-to-lunch, at worst they’re assaultive. ACoAs say: “But they’ve been there for me in the past, so I owe them gratitude & loyalty”.

Maybe they were OR or maybe we just thought they were because of our own level of ignorance & denial. But the clues to their real & potential abandonment were always there. Being mentally & emotionally unawares (not our fault) made it easy for us to not recognize other people’s limitations or cruelty.

To quote Toni Morrison (& Oprah) – “When you know better, you do better”
As adults we are responsible for putting ourselves in the positions to be Emotionally Abused by certain people. In essence we’re doing it to ourselves by letting our PP or the WIC keep drawing us back to empty or poisonous ‘wells’ for comfort, guidance & support! Not going to happen!
E.A.: Confused, abandoned, angry, longing, demeaned, depleted

NEXT: Victimizing Ourselves (Part 2)

4 thoughts on “Victimizing OURSELVES (Part 1)”