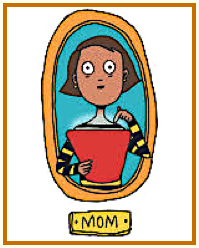 WHY DID I HAVE TO
end up with a mother like that???

These classic Abandoning / Abusive parenting styles leave big scars. If you were raised by a mother who was mainly one of these types OR some combination, it’s important to recognize where we got our dysfunctional reactions from – as a way to minimize or eliminate our Self-Hate.  (from Daily Mail Reporter, U.K. 6/2012)

NOTE: Each of these types are variations of Narcissism – when it’s a severe & life-long pattern (Characteristics of Narcissistic Mothers).  Read rest of article for suggestions of how to deal with each type.

1 . ANGRY
Although no child likes it when a parent is angry, an occasional outburst

does not create problems between them. What does cause harm is when a parent repeatedly uses anger to attack, shut up & control family members. When anger is always in the air, children live in a constant state of high alert, waiting for emotional explosions.

• As well as being psychologically damaging, this type of long-term stress is also toxic to the young brain. Flooding it with endless anxiety limits the formation of the mental circuitry needed to regulate emotional states.
Sad irony: these are the kids who most need to learn self-soothing & control their reaction – but are the least well equipped to do so

Continuing into adulthood, many such people say they still panic when around their angry mother, having grown up always feeling ‘wrong’. They’re most likely to become appeasers, programmed to please & placate others.
Sites: “My Mom Is Always Angry” / “My history of anger, 1-3″

2. CONTROLLING
This mother will try to run of every part of their child’s life, even to the extent of telling the child what to see, feel, think & want.

Healthy parents use control to shape general values & set specific rules – but always temper it with careful listening, & respect of the growing child’s ability to have their own personality & their ability to make age-appropriate decisions for themselves.

Instead, day-by-day, a controlling mother says, acts & implies: “I know who you are & you don’t / I need you to be X, which is more important than what you want / I know you don’t like it my way but I don’t care…..”’  She sees herself as custodian & shaper of her child’s mind.
Having been told repeatedly that mother knows best, these children learn to completely distrust their own wants, needs and opinions. Even simple independent decisions can fill them with anxiety. They also learn to lie – to say whatever the controlling mother wants to hear, just to keep her off their back
SITEs: ‘Signs you may have controlling parents’ +
“The Psychological Effect of a Controlling Parent”

3. EMOTIONALLY UNAVAILABLE
Sometimes the result of depression or chemical addiction, but most often because of narcissism, a mother’s emotional unavailability can be incredibly painful for a child, & leads to all kinds of upset & confusion.
This long-term emotional withholding effects the physical & chemical make-up of a child’s brain.

Growing up, such children see their role as comforter & protector, instead of being comforted & protected.

They’ll feel guilty for feeling happy, cling to the parent, avoid emotions or throw tantrums, & often take on heavy responsibility to make up for mother’s ‘absence’.

As adults, ordinary emotions such as joy & sadness may seem extreme, self-indulgent, even dangerous to these people. They may also have deep-seated beliefs about their role in close relationships – that other people’s needs are more important than their own, always have to be mature and ‘grown up’, & can’t trust anyone to be there for them.