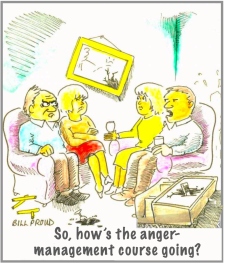 THERE’S NO END OF THINGS
that can set me off!

WHAT GETS US MAD?
Trigger + our point of view about it + our temperament = anger (but not always or for everyone)
Our emotional reaction of anger to PPT is usually a combination of internal & external factors. Sometimes external events that bother us are actually positive or neutral, but because of our internal damage (WIC & PP) we react to a stimulus with anger.  EXP – for ACoAs:
√ being accused WRONGLY enrages us
√ being accused RIGHTLY terrifies us (& then we get angry & defensive) 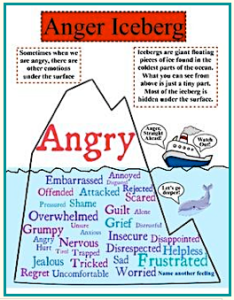 • While there are legitimate reasons to get angry, under the anger are some ‘sensitive’ emotions we may not want to admit to, such as loneliness, need, loss, abandonment pain, fear, sadness….. making us feel too vulnerable.
Everyone has triggers, based on our personality & childhood experiences. Anyone interested in Recovery /personal growth will need to identify our specific buttons, to better manage our verbal & physical responses. (Iceberg)

1. INTERNAL Triggers
⛈Emotionally, the big 3 inevitably triggers – are:
• HURT – our feelings, our integrity, an important loss, an insult to anyone / thing we love…..
• SCARED – EXP: Man on bike with little son on the back almost gets side-swiped by a bus, making him yell & hit the bus with his fist

• FRUSTRATED – whenever someone /thing blocks us from reaching a goal (big or small), especially if it’s for a long time

⭐️ Our own PERSONALITY – as mentioned elsewhere, genetics plays a part in our temperament. Some people are naturally more easily revved up when something goes wrong for them. (Enneagram 891’s, certain astrological combinations…..)

🌈 High / unrealistic EXPECTATIONS (‘should’ beliefs @ others)
Expectations held as demands usually create low-frustration tolerance, leading to inappropriate anger-expressions, such as:
√ a tendency to lecture people on how they ‘should’ / ‘should not’ behave
√ a deeply rooted belief that our circumstances & people ‘have to / need to’ be exactly as we want (MORE…. ) 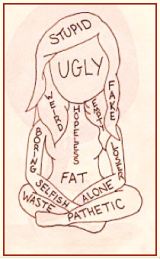 Awfulizing, blaming, discomfort-intolerance, mind-reading, filtering, perfectionism….. at best will lead to lead to disappointment & frustration, at worst to Self-Hate & rage. False beliefs cause anxiety, & sometimes aggression, in an effort to ward off perceived threats to our well-being OR to our self-image

CD cause us to misinterpret facts, events, or other people’s actions as threats to achieving our goals, or as attacks on our dignity, rules or property. Misinterpreting our environment leads to wrong conclusions, leading to self-defeating reactions (DRAWING)

⚡️IMPULSIVENESS (poor emotional control)
While some of us are natively more easily upset than others, impulsive reactions can usually be traced back to our WIC, filled with anxiety from past trauma. The more anxiety, the more likely it will be expressed by bursts of anger.
Some of us only let it out around people we’re close too, others only toward strangers. But the fact that it’s an instantaneous over-reaction tells us the Amygdala is in charge, not the Cortex. That’s why it’s considered psychologically immature.

🔥ANGER CYCLE – unhealthy responses to events which hurt, frustrate of scare us :
1. Trigger – loss, words, actions or anything else that will set off anger
2. Internal Reaction – letting us know that something’s ‘wrong’
3. Intensification – A flush of chemicals released in the brain, with heart rate & breathing dramatically increased.
This gives people a reason to justify how they’re feeling, most of the time from an inaccurate conclusion, based on false assumptions (CDs) 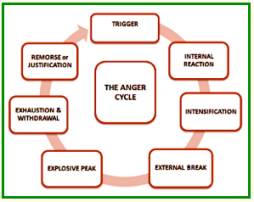 4. External Barrier Break – Some obvious signs of anger start showing which others can clearly see, such as crying, angry gestures, shouting….

5. Explosive Peak – when someone moves into a verbal &/or physically violent way of expressing their anger. Dangerous to others, but also to themselves – by saying / doing say things they may not really mean
6. Exhaustion & Withdrawal – when the anger/rage had died down or dissipated
7. Final Stage
a. Remorse & Apology – having calmed down & realizing their over-reaction, some people realizing their errors will  use this time to apologize for their outburst – OR
b. Intense Justification – others (especially narcissists) will not admit they’ve done/said anything wrong, & will find a ‘good’ reason for their behavior, including blaming others for causing their upset
REPEAT – Whether one is a chronic or occasional rager, without Pattern Correction, this cycle will be repeated. (From DAMBREAKER)