Skip to content
Home‘TRYING TO LEAVE YOU’ Stages (Part 3) 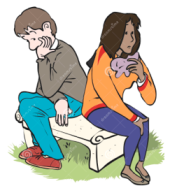 1. ACoA AVOIDERS (see Part 1)
COMMENTS
Re. ACoAs: It’s hard to make notes for each stage separately because we are so extreme – not going thru the steps at all, going thru them all in the first few weeks, or staying for years even when we know better….  We too experience endings (leaving or being left), but suffer more that people who are less wounded. So these are general observations of ACoA patterns

LEAVING:  Regardless of our style, personality type, previous experiences…. when we can’t bear it anymore – we leave, but rarely in a healthy way:
a. Even though w

e know a friendship or relationship is dead & hopeless, we desperately try to hang on, begging, chasing, manipulating, threatening to kill ourselves….
OR
b. We cut someone off – cold turkey, without explanation – & refuse any opportunity for closure.  If the partner or friend is the Clinging type, they will be unprepared & dumbfounded.
We are angry or fed up. We don’t want to deal with their abandonment issues, their tantrums, their sulking & self hate. We don’t want to get sucked back in. Our boundaries are not strong enough & it’s just not healthy

c. One or both create such drama, fighting, emotional upheaval – that the only possible outcome is an explosion & then the big split.  We don’t want to feel our abandonment pain either – anger is a cheap, fast & sometimes cruel or physically dangerous way to get out

d. For some, no matter how bad the situation, there’s no leaving at all – only an ending when one partner dies
e. Some ACoAs are capable of more appropriate exits, but it’s rare

STYLES
1. ACoA AVOIDERS: Some ACoAs are so afraid of commitment, being trapped, being abused & then left, that they don’t have

• If they try, they’ll go thru the 5 Stages very quickly – or stop at #2 – over & over,
♝ always finding fault with any hint of imperfection, OR
♝ always picking people & situations that reproduce the original abuse & abandonment, OR
♝ not giving healthy people a chance to develop connections that would be beneficial & uplifting

2. ACoA CLINGERS
a. Fantasy
• ACoAs often start relationships in a fantasy fog of symbiosis, all hopeful & excited. There may be very little thought, just a whirlwind of emotions (Es).
Or the thought is: ‘This time it will be different’

• Then the dis-illusionment. The other person says or does something so unacceptable – to us- that it breaks the trance of togetherness.  It may be :
✐ something TOO healthy (setting a boundary, not rescuing), 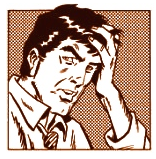 OR
✐ something truly hurtful / abusive / disappointing, OR
✐ it’s just that they triggered an old wound of ours.

• We may object, complain, attack…. but we stay rather than start over. We don’t investigate the actual source of our own reaction, & accept the unacceptable, spending all our effort covering up the problems. And then feel depressed.

b. Denial
• We convince ourselves the situation isn’t really that bad – that the mate / job / parent / sponsor / friend … has some ‘superior’ qualities we can’t live without. They may have, but it’s just crumbs, compared to the problems!

• Some of us even KNEW before we got married that this was not the right person – while walking down the aisle, but went thru with it anyway. (like Princess Diana….)

c. Shame (see posts) is caused by currently having any need some up that was regularly abused or neglected in childhood. Many ACoAs consider the Need for Love as a character defect. But needs never goe away. SO we keep picking people whose damage guarantees our continued abandonment!

c. Control
• We make a huge effort to change the other person so we

don’t have to leave, instead of changing ourselves. We badger, cajole, lecture, push, punish, bribe, manipulate. We get back only more resistance – of course!
• We spend a lot time punishing the other person for not being who & what we want, instead of moving on or letting go of our demands & expectations of another.