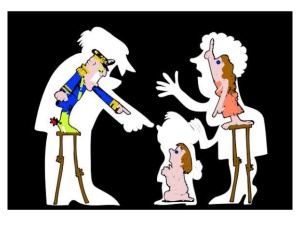 MY CHARACTER DEFECTS
are just twisted versions of the True me!

SITE:   What is High-functioning Anxiety?

2. NEUROSES  – From a DIFFERENT PERSPECTIVE (cont.)

c. Transactional Analysis  – The IMPASSE
Def : • A road or passage having no exit, as a cul-de-sac
• A situation so difficult that no progress can be made. Deadlock/stalemate

In psychological terms, impasses are formed as Type 1, 2 & 3 developmental stages in childhood, during which script-decisions are made. Scripts – our unconscious plan for life /internal ‘story’ – are usually based on unmet needs & abuse. This causes inner conflicts between one’s Parent & Child ego states, & usually experienced by the child first as a personal failure – an internalized sense of inadequacy. Parents, wider family & society present, repeat & reinforce scripts – in some cases positive, but in most cases harmful. (See the Gouldings’ 12 script themes – similar to the ACoA Toxic Rules)
✥ This shows the power & active participation of children in their own development.

As adults, we all carry a representation (model) of the world  & ourselves – where we belong, how we fit in, our work & how we do it, & where we’re headed. If the source of this model comes from a dysfunctional family, it will always fall short of dynamic, ever-changing reality – limiting our S & I growth.
An impasse (being stuck in some area of life) indicates a need for change in order to move forward. The different intensities of psychological disorders represent various stages & intensities of impasse. (MORE...)

CHART: 3 development stages of conflicts between inner Parent (P) & Child (C)
3rd degree impasse (Po-Co: Birth to 6 months, pre-verbal, even pre-natal)
These earliest conflicts are produced by the type of connection between mother & child, depending on how they relate day after day. They will be around the issue of survival, between: abandonment & engulfment, destroying or being destroyed, worth & worthlessness….

EXP: If the mother has an unhealed WIC – stuck in her own impasse – her wounds get communicated to the baby, day after day. If she is insensitive, controlling or brutal – the effect on the baby is predictable.
However – much more difficult to identify later on –  if her grown up Adult & Parent parts are used to activate, even improve her parenting style, without Recovery her behavior won’t have any affect on her little C1 ego state. No matter how she tries to cover it up, her deepest damage will unconsciously keep re-traumatizing the baby.

A depressed or angry mother can ‘responsibly’ feed & look after her baby son every day, but he knows / senses his mother is emotionally bereft. He intuits (or is told) that he needs to take care of her – all focus must be on her instead of his own feelings & needs – OR ELSE she may somehow leave (die). So he feels unworthy to be taken care of & worthless for not being able to help her, which causes intense anxiety. So he slowly develops defensive patterns like people-pleasing / isolation / addictions…., which form his False Self.

As an adult, this earliest impasse continues as deep-seated conflicts in

PMES forms such as muscle tension, psychosomatic complaints, immune disorders…. & expressed verbally in symbolic images, such as “I feel as if I’m in a fog, lost, cold & alone, there’s a wall up between me & everyone else” ….

2 degree impasse (P1-C1:  6 mths – 6 yrs)
Made up of Injunctions (authoritative orders) carried by feelings /emotions. They become internalized, often through non-verbal commands, at a time when the child has only a basic grasp of language. Script-decisions made are around basic theme about the child’s identity, such as: “Who am I? // Am I important? // Don’t grow up // Don’t feel”….. Later on, it’s much harder to remember how these issues developed, so the person usually doesn’t know they’re stuck back there

1 degree impasse (P2-C2 : 6+ yrs old, when they can understand language)
The struggle here is between what the child should & should not do, what behaviors are socially acceptable or not. Internalized verbal instructions (counter-injunctions) will be things like: “Please others // Always try hard // Be a good boy or good girl // Never get angry”….. These are more accessible to awareness, so later on it’s easier to remember who gave them & in what form.

BREAKING the Impasse – options
When the Bad Parent is so strong that it keeps the messages in place, the person gives in & continues to live by the original ‘rules’, keeping the Healthy Child bound. HOWEVER –

a. When the person’s Wounded Child refuses to go along with its Bad Parent’s messages & is finally allowed to get angry, it liberates the Healthy / Free Child
b. The Bad Parent’s injunctions are agreed with, but the Healthy Child’s needs are ‘redefined’, often in humorous terms. Then both sides win.
EXP = Parent voice: “You’re crazy”
Child: “I may be crazy, but I’m never boring!”:)