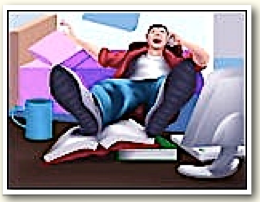 PREVIOUS: Why are you stuck?

POSTs: “What to do when Confused”

NOTE: In terms of T.E.A., this topic is about ACTIONs. When we say we’re stuck, it often means that we’re not able or willing to take actions we know are needed & good for us, or that we would like to do, but ‘can’t’.

ACoAs are ‘famous’ for putting things off.
Of course, there are the over-controlled action-junkies among us who are always doing, doing, doing : for work, for the family, for the community – but not for ourselves. For these ACoAs, the ‘putting off’ issue is about not taking care of our own needs.

1. PAST Causes of Procrastination

These situations happened from the very beginning of our lives:
• Endless family chaos. No matter what we started (studying, playing, chores, going to bed….) or how hard we worked to put something together (a project), some drama or another would take precedence. Our life kept getting sidetracked by someone else’s mess or bigger needs. We’d have to start all over again, or never get back to it at all

• Lack of positive Mirroring: not having someone clearly reflect back to us how we do things, what our personal style is, how our mind works, what our specific abilities are…. SO we always end up saying “I don’t know who I am, what I like, what I want to do when I grow up…”,  even though since then we’ve had a lifetime of experiences, learning, accomplishments…. which give us lots of definite hints & signs

• Nothing was ever good enough:
— parents constantly criticized everyone & everything, arbitrarily
— we were never acceptable (much less appreciated) – they found fault with our taste & choices (clothes, music, friends… )
— criticized, made fun of or punished for not knowing things, not for “doing better”….
— AND for being too smart, intuitive, clever, artistic….(parents were threatened & jealous)

• Forced to do, learn or study something we hated or genuinely did not suit our True Self – sometimes for years (sports, camping, an instrument, a particular profession… spending time with hated family members, sent away to school, put to work in hated family business …), so now we do as little as possible or as poorly as we can get away with

• Being constantly discouraged / undermined by the adults when we talked about our opinions, plans, dreams (“There’s no future/ money / jobs… in X / That’s dumb… / Don’t waste your time on Y…..”)
— OR not allowed to help them with anything – chores, working on the car, cooking, painting the house, decorating…. as if we were too slow or too dumb, so we think we can’t do things

• Being put down when we actual did something – trying to figure out how to do a new task, taking longer to learn something than they had patience for (none), not ‘getting’ something (like math)
— ALSO, insulted, attacked, made fun of…. for things we naturally did really well (games, sewing, sports, art, languages…), especially if they could NOT do it as well or at all, pushing their insecurity or envy buttons

•  Had dismissed or devalued whatever good we tried to do, like wanting to help, showing concern, being on our best behavior, suppressing ourselves to please them…. even the gifts we made or bought for them were ignored, given away or returned!

• Were never (or rarely) acknowledged – much less – praised for what we did accomplish.
Kids need validation for any effort, without it having to be of world-class quality. So now we don’t value our accomplishments either!