YOU MEAN I HAVE TO
be happy for someone else?

SITE: The SKILL of LISTENING  ** with examples
(Center for Parenting Education)

QUOTE: “We have two ears and one mouth so that we can listen”~ Epictetus

REMINDER: Accurate & compassionate listening means we don’t try to make the other person a carbon copy of us. Even if we strongly identify, listening is about THEM – where they’re at, what they’re feeling & thinking. Don’t talk about yourself too much. You are the listen-er, they are the listen-ee.

#3 VARIATION (re. actions)
(A) When someone wants you to listen to them AND asks you directly to tell them what to do
a. Naturally if you are sought out as a professional (doctor, decorator, coach, teacher, lawyer…) you’re paid to give your expert opinion & advice.

— However, for psychologists, psychotherapists…  the rules are different. The goal is more about mirroring, giving feedback (true listening), providing the client with options & helping them find what’s right for themselves.

b. For the rest of us who are not being paid, teach or heal, there are options.
• ASK if they want ‘advice’ OR information – not the same thing!

Advice is telling someone what you think they should do, be, feel, think based on yourself, not who they are! No matter how right or helpful the info is, it’s not listening.

Information is giving knowledge they may not have, including options, without an emotional valence attached. They can use it or not, as they wish We often tell people to DO things they’re already tried. Don’t waste their time or yours! Good listening is hard for ACoAs, but worth the effort!

i. When you know the listen-ee well, you probably know — 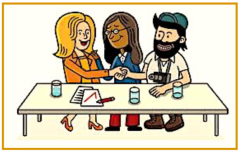 — if they already know what to do – but in this case refuse. Don’t push
— that they may know, but really do need some help implementing a solution.
Suggest someone else who is qualifies & willing, or if it doesn’t harm you, you can offer, but think twice before you do

— that they really don’t know. Then you can decide IF you want to give them info, or suggest where they can get it (on Google, from Al-Anon or AA,  some books you recommend….)

ii. If it’s someone you just met or don’t know well, start by asking some pertinent questions —
— What do they WANT from you? What are they really asking for & how much? See posts “Healthy Helping”. If you can get that far with them, the conversation may take a different turn than how it started

— What have they done about their problem / situation so far? & how have those things turned out? This saves time & energy suggesting things they’ve already covered.
• If they’ve tried a number of things which have all been disappointing, there may be absolutely nothing you can contribute. OR they didn’t try something useful because they didn’t know about it – so you can offer it

won’t work / I can’t because….” then either you’re asking the wrong questions or they’re playing the “Yes, But” game from Games People Play, by Eric Berne.

In the latter case they don’t actually want an answer, they want to be parented AND be contrary, which is a child’s way of saying “You can’t control me.” It may be a version of “Come here-Go away“(posts).