SEPARATING FROM THEM
is good for me and them!

QUOTE: “The successful process of Separation is the source of our personal autonomy, our independence, our ability to assert ourselves and our capacity to make choices.”    From The Ties that Bind, the Ties that Strangle

A CHILD’S BRAIN
Adult life is influenced by infancy in spite of our inability to remember that far back.  In “Why Love Matters: how affection shapes a baby’s brain”,  Sue Gerhardt considers how the mother-child relationship creates baby’s nervous system, with lasting consequences, affecting our future emotional well-being. 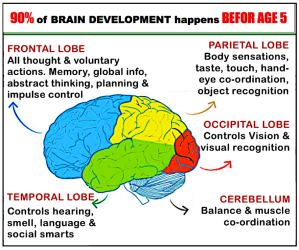 • “… foundations are built during pregnancy & in the first two years of life… This is when the social brain is shaped, the emotional style & emotional resources established”

• “… a poorly handled baby develops a more reactive stress response & different biochemical patterns from a well handled baby…”
• “Babies of agitated mothers may stay over-aroused & have a sense that feelings explode out of you, & that there is nothing to be done about it. CHART  ⬆️ (also Teenage brain)
Well-managed babies come to expect a responsive world”

CHILDHOOD
Margaret Mahler: Psychological separation is the development of limits, the differentiation

between infant & mother. It’s only possible if the infant is absolute secure in its attachment to the caregiver during its first year of life, AND then develops enough of a capacity for autonomy, self-reflection & self-reliance, normally by age 2.

For this to happen the mother needs to be able to accurately, consistently respond to the child’s internal (emotional / mental) & physical needs, at the right time & in just the right amount – using intuition & common sense.

• This allows children to form a stable emotional core, as they recognize & accurately interpret their mental & physical experiences (touch, talk, play….), which are then organized & grouped into loose patterns.
The first act of separation occurs during the ‘terrible 2s’ when children come upon the concept of “no.” They are exercising a natural instinct, but while they may be annoyingly persistent, they don’t yet have the power or autonomy to enforce it.

As children grow they can put more power behind their “NOs”. This makes it hard for parents to let their children take the risks that a “no” implies – who naturally think they know best. So Separation is difficult for normal / healthy parents who love & want to protect their children.

✶ But this freedom is even harder or impossible for dysfunctional parents to provide, who have their own S & I, FoA & power/control issues!

ADULTHOOD
Well-differentiated families (good S & I & therefore nor-symbiotic) have the flexibility to balance the need for connection / stability against the need for each member to also have autonomy.
NO : Separation does not mean giving up the close attachment we have with parents or other people, nor having to be geographically separate.
YES : Separation does mean that we recognize we’re not the same as our loved significant others, that we react & think differently, AND that is OK!