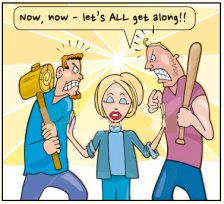 I CAN’T STAND DISCORD –
I have to make nice

PURPOSE
For Self: try to not keep getting abandoned, to feel safer/not get hurt & be loved, by calming everyone, preventing conflicts or any overt expression of anger
For Family:  When parents are impaired in some way, they become a surrogate. Born negotiators, they seem to have an uncanny ability to ‘read’ what others are feeling, but at their own expense. Learn early to smooth over potentially upsetting situations & take responsibility for everyone’s pain & emotional well-being

BIRTH ORDER: can be oldest child, usually the girl
IN SCHOOL : very compliant, well-liked, so-so students – preoccupied with other’s problems rather than studying
FAMILY TREATMENT
Used as the family social worker, inappropriately told all the adult’s problems, ‘valued’ for not being any trouble

DEFICITS
Few self-protective boundaries, don’t have a clear identity of their own, are not in touch with their own emotions & needs, so can’t get them met, are ‘lost’ without someone to please or fix

TO: “It’s ok to have a focus of my own”
“I am likable without having to take care of others”
“I don’t have the power to keep someone with me, but if they stay it’s because of who I am, not what I do for them”
“I can do whatever suits me best, in all situations”

Placater DEFENSES
• Develop a high tolerance for inappropriate behavior, will take the blame for things not their fault (ironically), thereby protecting others from taking responsibility for their choices & actions
• Main concern is on themselves & how they’ll be perceived. They react to stress or ‘uncomfortable truths’ by trying to avoid it, sometimes going to extraordinary lengths to avoid confrontations
THEY:
• May sacrifice themselves – are willing to lose so others can win
• Efface & belittle themselves, while inflating others, to get brownie points & stop possible aggression.
• Actually believe they care so much about others & that no one cares for them. Can be great listeners

COST TO SELF
Deep sense of not being good enough just as they are, or the right to get equal attention & caring from others.  Denying personal needs, they’re unable to receive, have ‘false’ guilt, a great fear of conflict & anger, are hyper-vigilant with high anxiety

They’re often in abusive & one-sided relationships (with spouse, children, friends, bosses…), constantly giving without getting anything back.  Are overly responsible so become excellent enablers, marring addicts or other ‘broken’ people. Often choose careers as helping professionals, which can reinforce the tendency to ignore their own needs, such as social workers, nurses, therapists…. (more likely in ‘supportive’ positions, so not often male doctors)

PARENTS CAN HELP CHILD
TO: Allow the child to focus on themselves and not others, separate their personal worth from doing/ care-taking, help them to focus on Self instead of others, learn to express emotions & playing

BY: Validating P’s intrinsic value (being vs doing), helping them develop ability to take care of & prioritize needs for themselves (when child IS helping another – ask them what he/she is feeling at the moment)
• Parents (P) talk about & act in ways that reinforcing that prove the adults can take care of themselves & other family members, so the child can relax