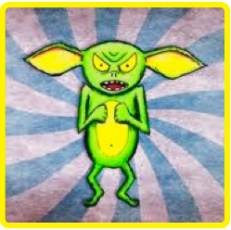 MY ANGER GREMLIN
is in charge at the moment!

2. EMOTIONAL REACTIONS
a. The ‘Reptilian’ brain-stem, or hind-brain (Old) – is responsible for basic survival functions, including such inherent instincts as = cold-blooded behaviors, the desire for top-down hierarchy & obsession with ritual.

It accounts for anger, the desire for revenge & retaliation, fears, jealousy, self-preservation, selfishness (keep what’s ours), violence & being protective of our tribe (stay close to our smaller circles & suspicious of others). (More….)

NOTE: The term “reptilian” is not a biological term, just a way of referring to a primitive part of the brain technically called the basal ganglia. EXP:  ‘ADD’ is a Reptilian Brain problem (More…)

b. Limbic System, (part of the Mammalian / Middle brain), is at the top of the brain-stem, on either side of the thalamus & deep in the middle of the whole brain mass. It’s Command Central for emotions & emotion-connected memories, mainly made up of the hippocampus, hypothalamus & amygdala.

• The Thalamus – while not a direct part of the Limbic System – it acts as a kind of railway signal box. As information comes in through the senses, it goes directly to the thalamus which sends the signals off to different parts of the railway yard (brain) – to the cortex (rational) & the limbic system (emotional) at the same time, although the latter will react a lightning split-second quicker than the cortex, often sending people into flight or fight when it’s not really necessary in a present

i. The Hippocampus is very important in converting short-term memory into things we can remember for the long haul. It sends memories out to appropriate part of the neo-cortex for long-term storage, & retrieves them when necessary. It helps us develop clues for recognizing relatively safe/unsafe circumstances, & to form new memories about how to avoiding problematic PPT.
If DAMAGED:
• a person can’t build new memories, & so ends up living in a strange world where recent experience fade away, while older memories are untouched
• an over-active hippocampus generates constant fear, so the person is always looking for “common sense” things to do / not do, for self-protection, when nothing is dangerous  (Rage & Brain Anatomy)

ii. The Hypothalamus plays a major role in regulating hormones, the pituitary & adrenal glands, body temperature…. Also instinctual & emotional processes, & production of peptides in reaction to stress.
There is a rage ‘center’ on one side, & the chemicals it produces dock in the cell receptor sites for anger. The physical effects last as long as these chemicals are in the blood, which is not a problem with short burst of anger, but chronic bouts are dangerous & sometimes lead to early death….
INFO: Your brain…./ Brain Tutorial / Emotional Biochemistry / Peptides & moods 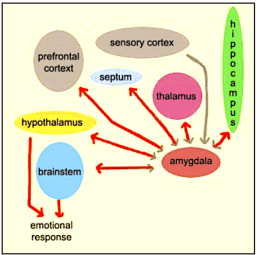 iii. The Amygdala, made up of 2 almond-sized organs just above the hypothalamus, & a few inches from each ear. Among other functions, they produce & sort out a wide variety of possible emotions available to us – anger, attachment, disgust, pleasure, fear, shame, sexual desire…. (CHART)

◆ When the brain perceives a threat, we experience fear, anger, worry…. from both unconscious & conscious pathways. The amygdala is central to both.

√ The unconscious component of emotion is analyzed by the nervous system, the amygdala determining the threat level, & the hypothalamus regulating emotional intensity
√ The conscious part involves evaluation by the neo-cortex, the hippocampus & amygdala, which coordinate the awareness of feeling, & bodily sensations of emotion, particularly fear.  (Decision-making & Emotions… // Emotions outweigh Logic)

NOTE: A hormonal flush (adrenaline, testosterone, peptides….) can temporarily throw us out of control, when we may say or do things later regretted.
This chemical cascade lasts longer than we’ve been led to believe. Quieting down from an angry state of arousal can take as long as 20 min. – before we can actually think again.
That’s why “counting to 10” does not usually work – it’s just not enough time.

ALSO, having long-lasting hormones in the body explains why we can over-react to a small incident ‘out of the blue’ IF we’ve recently had a powerfully angry reaction to something else & seemed to have calmed down, but still had the chemicals active in the bloodstream (rage-calm-react).