DON’T KNOW WHAT’S WRONG
must be those pesky chemicals!

b. The LIMBIC SYSTEM (cont.)
iii. The Amygdala (cont)
While there are successful behavioral tools to manage hostile responses to life’s difficulties, chronically angry people may have trouble using them if their brain isn’t producing enough acetyl-choline, the hormone which tempers the more severe effects of adrenaline & helps to schedule REM sleep.

BTW: Introverts generally have higher level of this calming neuro-transmitter, so they’re more comfortable being alone, not needing a lot of stimulation in order to burn off excess adrenaline.(More...)
AND – they’re highly sensitive to Dopamine, so – too much will over-stimulate them.

✤ Under sudden stress, the brain is wired to make us react before we can properly consider the consequences. While the amygdala is very efficient at warning us about a threat.
But it can only react based on previously stored patterns – it is not good at judging or evaluating what to do about it.
When flooded with emotions, it ‘hijacks’ the rest of the brain, so the prefrontal cortex (PFC) gets temporarily cut off, without the thinking-option of checking if our behavior is reasonable, appropriate or safe.

EXP: If anger takes over, a person will tend to ‘shoot from the hip’ instead of from the head. However, resilient people (emotionally & chemically balanced) are able to make a faster recover

y from stress, allowing them to use the thinking brain more easily to calm emotional intensity.

✤ Emotional flooding does not excuse bad behavior, but it does mean that managing anger properly is a skill that has to be learned, NOT something we’re born able to do instinctively.

NOTE to ACoAs: This is another reason there are times when we can’t seem to respond successfully or at all – until well past the event. It’s when we’re shocked by someone saying or doing something that scares our WIC, whether outrageous, actually harmful, or just because it reminds us of our family.
For us, it’s only later – sometimes much later – that the cortex is finally able to kick in & lets us think of all the ‘right’ or clever things we could / wish we would have said. Very annoying, especially in the modern world where words are more often needed than fists!  (See ‘Communication discrepancies’ – “DM, Part 5”)

Re. the Amygdala in Animals
Overactive – When their brains were stressed by electronic stimulation, they became aggressive. As the irritation continued (just like ACoAs suffered as kids), the amygdala became overactive, dramatically increasing the subjects’ agitation & short-temper
Missing – When the 2 structures were removed, the animals became very tame, no longer respond to things that previously would have caused rage, fear or sexual interest…. 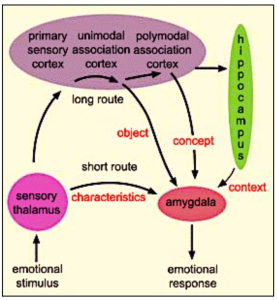 FEAR PATHS:
Info first goes to the thalamus & then to 2 parallel pathways:
√ The ‘low road’/short route (12 milli-sec.) provides a fast, rough impression of the situation, bypassing the ‘thinking’ brain. This creates an emotional response before all the facts are in

√ The ‘high road’ / long route (24 milli-sec.) – going from emotional input, thru the cortex to the amygdala – allows the brain to determine if an event is truly life threatening.
If the frontal cortex decides rationally that it’s not, it dampens the intensity of the amygdala’s quick reaction, via the unconscious. (MORE…. birth – age 7) (Circuitry & Sense of SELF)
In Humans:
When the amygdala is damaged, experiences which should cause alarm don’t get to the cortex for processing (high road), and a person will compulsively go toward dangerous things, even when repeatedly warned against doing so – because the fear response is missing (low road).

EXP:  When one woman had her amygdala removed to stop her seizures, those were eliminated.
But – she was no longer able to recognize fear or anger in herself, or in other people’s voices. However, she could still identify & understand expressions of sadness, disgust, happiness, & surprise.
◆ In the case of PTSD, the route through the cortex isn’t able to dampen enough of the fear response that has already taken place previously / repeatedly in the low road.