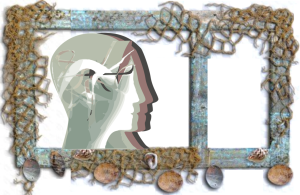 ISSUES
Frames define the immediate moment & overall interaction (frame vs meta-frame in NLP). Whoever is setting the frame is controlling the interaction by creating the context for everything that happens within it.
Double Binds (DBs) are basically a way of the forcing frames on the R that the Sender (S) wants to exist in an interaction

❖ ‘Normal’ FRAME CONTROL: S’s degree of proper expectation setting, AND degree of understanding those expectations (R).
Frames take time to develop, since they’re based on repeated experiences, forming assumptions of how things will turn out or how we think they’re supposed to be.
D.Binds rely on the Victim’s (R) desire to figure out what the Perpetrator (S) wants & the effort to obey, who then thwarts that possibility

The effects of normal framing are like optical illusions. Do we see the glass as half full or half-empty? Did you

& your ex ‘break up,’ or did he/she ‘dump you?’ You hear a noise at the front door – are you scared (you’re all alone) OR feel happy (expecting your lover)?….

❖ PARTS : One of the ways we figure out our environment is by deciding what to include in each experience: which parts are relevant & which can or should we ignore?
D.Binds take away our ability to make those decision or have options

❖ WORDS : The specific words used, when combined with the setting (DMs – #1), create a feedback loop that guides & shapes our interaction with others. The choice of language for each type of basic frame is crucial, because its verbal images, story lines & emotions can evoke higher-level moral & theoretical frames.
D.Messages include lower level components but disregard logic & morality, leaving us at the mercy of the puppet master

❖ VALID frames are made up of a group of logical & related ideas, &all the pieces must be known in order to understand the whole. (If you only hear one side of a phone conversation you can’t know what it’s really about.) 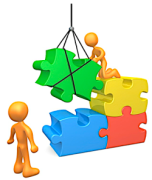 • Equally – to understand any one piece of info, the whole system (context) has to be understood. (If you only hear the word ‘whore’ you don’t know if it’s an insult, a metaphor, part of a story, a religious reference….).

• On the other hand, individual words can represent a whole category of information, so introducing one idea (a past ‘moment’) can bring to mind a complete picture – from our store of memories & experiences. But the words, phrases & images have to be understandable & logical.

EXP: ‘Dope’ can mean a narcotic in one frame, & “that’s great” in another. In one frame both meanings are positive (who’s speaking), but in a completely different frame ‘dope’ is harmful, & using the word to mean ‘great’ makes no sense (as with ‘straights’)
D.Messages juxtapose opposing concepts as if they belonged together, making them both irrational. This misuse of language sets the stage for confusing & then controlling another person

❖ INVALID frame: In group therapy Lina complains that after only one year of marriage, her husband ‘unfairly’ divorced her, even though they love each other, because his teenage daughter from a previous marriage violently objects to their union.
The group is confused. Why didn’t she fight for her marriage? Why couldn’t they work it out? Why is the father so eff

ected by the girl?….

What Lena LEFT OUT of her story – is that:
a) her husband is an active alcoholic, & won’t get ‘help’ of any kind
b) his first wife is Lena’s oldest sister, so she’s known him for many years
c) her husband’s daughter is also her niece, whom she helped raise from infancy!
No wonder the girl is upset! AND why Lena was in a BD!

D.Binds are neither meaningful nor useful, because they create unsound frames that violate the rules of logic, totally slanted to only suit the Sender. (“How we think…”)