I WANT TO IMPROVE
as many relationships as possible

SITEs: Healthy way to forgive yourself (and its dark side)

TOOL 6b. FORGIVING Ourselves as ADULTS (cont.)

SELF-FORGIVENESS is letting go of guilt & shame, which takes persistent time & effort, and in never complete. Letting go means accepting that we can’t change our past, but can learn from it.
At its heart, ACCEPTANCE is seeing everything as it really is, no matter how unpleasant, rather than what we want it to be.
Acceptance eliminates illusions & CDs, & so makes letting go possible.

++ Accept that we are wounded – not defective. Letting go means stopping the cruel inner PP rant – a choice we can implement every day. Given the very hard times we’ve been thru, it means we need to be extra kind to ourselves. (Purpose of healthy parental mirroring )

++ Accept our human limitations, which will allow us to let go of judging ourselves so harshly —

• for having depression & the need for medication
• for not knowing things everyone else seems to be ‘in on’
• for not being perfect // not knowing everything // making mistakes
• for being so scared inside // being controlling // nit-picking
• for procrastinating or never finishing anything…. all opposites of RIGHTS list

++ Accept that every child is programmed to follow their upbringing.  If it was alcoholic, dangerous, neglectful…. we drowned in too many rigid, harmful laws – or were completely left to our own devices. Now we can slowly form a new set of rules, loving & flexible – which will eliminate much of the need for fake niceness, so we’re free to be genuinely kind  (“ACoAs – Healthy Rules“)

++ Accept that along the way we’ll have to deal with the guilt that churns in our gut whenever we disobey any Toxic Family Rule, but it doesn’t last.
This is ‘good guilt’ because it signals that we’re doing something healthy for ourselves, by going against all our crazy training.

LETTING GO means:
• facing & dealing with our anger at our family, & other T.E.As.
• releasing any & all accusations or blame of God / the Divine for painful experiences caused by humans
• being kind to ourselves, no matter what, & staying present for whatever Es come up
• acce

pting all our emotions, without reservation or judgment
• remembering painful & embarrassing situations we got ourselves into because of anxiety, FoA & dissociation (out-to-lunchness) – without S-H
• forgiving the things we didn’t do, which caused us or others harm.

EXP: In her 20’s Jenny had a little grey cat she loved a lot. As Greyling was getting older, he get thinner & thinner, but Jenny was too busy studying & writing papers for her college classes to pay much attention.

• One night Greyling flopped over on the bed, not able to stand. Jenny was worried, but thought he was just old. The next day she saw he was very weak – not moving, not eating – so she finally took him to the vet. The vet took one look at the little cat & turned angrily to Jenny. “You let this cat deteriorate to the point that he’s so dehydrated he had a stroke! There’s nothing I can do – he needs to be put down!”.

• Jenny was devastated at the loss, & deeply ashamed of her neglect. She had caused this sweet creature severe suffering because of her obliviousness. Working it thru in therapy & ACoA meetings, she understood that ignoring the signs of illness in Greyling came from her grammar school time. She spent many years seeing her father in terrible pain from a long illness, often lying in a dark room but never complaining, while mother kept telling her to be very quiet & not bother him.
Jenny loved her dad & hurt deeply for him, but was totally helpless. To protect against her overwhelming frustration & powerlessness, she became numb to physical suffering.

• Accepting the connection between past & present, & continued to grieve Greyling, Jenny sincerely forgave herself for her inaction, without S-H, knowing where it came from. Even years later she sometimes feels sad for her dad & the cat, but has made sure to not make that mistake again.

WE  SEE THINGS VERY DIFFERENTLY.
Can we understand each other better?

“WHEN YOU….”
‘KtFoY’ = “Keep the focus on yourself!” (Read posts)
• We hear from many sources that to be mentally & emotionally mature, we need to take responsibility* for our own TEAs (thoughts, emotions, actions). Yet ACoAs were taught by our family & religion NOT to think about our own needs, tastes, ideas, values… only other people’s – which means we’re not allowed to KtFoY.
It’s considered:
— selfish, because it takes attention away from them
— arrogant, because we feel so worthless that we have no rights
— disobedient, because we’re not allowed to think for ourselves – only what they said
was acceptable – no matter hoe contradictory or crazy

Can you hear the PP’s poisonous voice whispering: “Who do you think you are?”
And no matter how intelligent or accomplished, without training, many ACoAs actually

don’t know what KtFoY means or how to do it.

REMINDER: *Taking Responsibility is different from Self-Hate, which tells us everything bad / painful that happens to us and others – is our fault.
Responsibility is not about fault, but rather ownership. It acknowledges what we have or have not thought, felt or done (T.E.A.) – period. S-H adds to that :”Yes I’ve done/ not done —- and therefore I am bad!” This is not KtFoY.

•  Taking responsibility without S-H allows us to determine who did what – if anything – & if there is anything we can learn or correct for next time – without shame or recrimination.

• Some ACoAs will use KtFoY to justify being selfish, thoughtless & inconsiderate – coming from their narcissism. Like, promising to do something important for another person, & then flaking. When confronted, they may say “Oh, I just needed to take care of myself” – without considering the consequences to anyone else.

• Other ACoAs think they’re being righteous when they use their version of KtFoY – but only to point a finger. Like: “I feel that you…. should be more… are being stupid for staying with… don’t know what you’re talking about… ought to do…”

POSITIVE USE:
•  Identify the thoughts & emotions YOU are having about a situation, leaving out as much reference to others as possible. That may take some soul-searching, but a good way to find our what’s going on inside is to ask what the the Inner Child or the PP is going on a about. Either one is having some old emotional reaction – the direct result of our thoughts – wrapped in a cognitive distortion & Toxic Rule “If it’s hysterical it’s historical”.

•  Then, if appropriate, state what you’re thinking & feeling. Of course you’re reaction is in response to something or someone else, but it’s YOUR response, regardless of that they do or say.

Such as:
— Re. Es: ‘When you talk like that it hurts my heart!’ or  ‘It’s very painful for me to watch you harm yourself’  or ‘I get so angry when you disappoint me, over & over!’
— Re. Ts:  “I simply don’t agree with your assessment of the situation” or “I don’t understand why you keep …” or “I know I didn’t do that, even if you don’t believe me”….

➼ Notice that these are all “I”  statements. It’s the best way to communicate, because it eliminates blaming or trying to control.
It also stops most people in their track – it doesn’t give them much  they can use to escalate. They can of course divert your attention by changing he subject, or just make fun of what you said.
Hopefully it greatly cuts down on defensive, angry & resentful responses

REMINDER: Don’t wait endlessly before saying something appropriate about an annoyance or a serious problem. Otherwise you’ll just be in a rage & any communication will be short-circuited.

SO, back to these forms – regarding something another person has done over & over that bothers you a lot. Notice:
— Form A. was about a future event that worries / angers you
— Form B. is about recent but ongoing past actions, you wish would stop. Examples in Part 2 &3.

IT’S MY JOB TO FIX YOU
but it’s exhausting!

RESCUING / ENABLING is an expression of Co-dependency, which can be defined as — Suffering from the relational dysfunction of having to focus on the needs / behavior of others. A complex way of reacting to an addict or other dysfunctional person you’re involved with. (MORE….)
If we constantly rescue those we love from making mistakes, they’ll never have a chance to learn from & outgrow them, encouraging them to stay dependent on our help for their well-being.

RESCUING examples
WHEN We:
• have to keep on helping, because they aren’t helping themselves / growing /  improving their lives
• need to keep nagging someone to change – for their benefit, yes, BUT mainly because it’s pushing some button in us, from our past
• give advice – especially un-asked-for, assuming we know what’s best for them, & our need to show off how much we know (about everything)
• assume others cannot cope with their own pain, & that it’s our life’s duty to protect & sooth them
HOW:
• always insist on having an answer to everyone’s problems – to solve their difficulty or emotional discomfort

• use phrases like “You shouldn’t, you should…” as a way to tell someone how to be, how to feel, what actions to take
• enable someone to continue their self-destructive behavior

• not confront denial or challenge distorted thinking – when it harms us, although this has to be done carefully & with great wisdom
• not letting others know when we’re angry – when they hurt us, crossed our boundaries, were disrespectful… to not ‘upset’ or make them angry in return
• being afraid to say what we need, what we believe, what we don’t want… because we think it will hurt their feelings, or burden them
• try to distract others from their emotional pain (because we can’t handle our own & so don’t want to hear theirs)  by humor, changing the subject, telling them to DO something   ….
Trying to rescue others is NOT a successful way to accomplish our goals of wanting to CONNECT & to feel EMPOWERED.

SOME RESULTS of Rescuing
IN US:
• FEEL abandoned! – emotionally frustrated, drained, powerless, hopeless, a failure  – because they’re not improving &/or doing what we want
• Silently expect & eventually demand a return on our time, money, energy, attention… whether or not they asked for our efforts, or have any idea what  we need (they’re

supposed to know, automatically)
• Get physically worn out / burnt out from over-doing for others without taking care of ourselves, sometimes even get sick, from exhaustion, & needing a ‘legitimate’ way to get some rest & care

• Become increasingly resentful & then in a rage – because they’re NOT listening to us, not reciprocating, not making our life easier… AFTER ALL WE’VE DONE !
– In some cases, we stay & rescue  – until we fall apart or die trying
– In some cases the rage become too great. First we beg, cajole, nag, THEN punish, verbally attack, maliciously gossip about them OR just cut them off without a word of explanation. Then they’re dead to us!

IN THEM:
• they stay immature (rescuing infantilizes others), get psychologically weaker ( 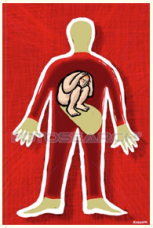 stay dependent, on us or someone else)
• don’t learn to take responsibility for their own life
• don’t get the experience of learning what works & doesn’t – for them
• feel humiliated, by being one-down & eventually get angry, resenting us for our power-position
• don’t get a chance to find out what they’re actually capable of doing or becoming
• have a distorted view of us & themselves, and what is real

IN RECOVERY
The goal of all personal healing is S & I – Separation & Individuation.
That means we have to become our own person – the ‘Self’ we were born to be, designed & created by our Higher Power.   And that means –
• Identify & acknowledge our needs (not others’ needs)
• Have permission to own those needs
• Actively get those needs met – by ourselves, & with the help of a positive  &/or loving support system

➺ That is called GROWING UP & TAKING RESPONSIBILITY!
It is NOT selfish to take care of ourselves – it is a mark of mental health !
(Read: What Recovery IS  / New Rules / Boundaries  / Healthy Families)