OPTIONS in dealing with DBs
Once you – the R – have gotten caught in a Double Bind (DB) you’re going to have to accept that ‘getting away’ may be painful & slow, especially if the S is important to you & you’re afraid of loosing them.

Remember, people who use DBs need to control others & are NOT safe, most likely a severe narcissist, & therefore not truly loving. That’s an illusion they create & you buy into.
✦ Feeling angry, frustrated & ‘crazy’ – about yourself & toward someone else – are your HINTS that they’re pulling a fast one on you, whether deliberate to not. It might be necessary to move out of their range, which is not easy, but it’s also not the only option.

• Getting relief from a DB situation comes from recognizing & addressing the Conditions which are required to produce it (see “How It Works”= DMs #3 and DBs, #2). But FIRST – know that you have to ‘chose your poison’ & that there will be some repercussions for the side of the DB you reject.

You will need the ego-strength (self-esteem) to bear whatever reaction you’ll get from the Sender you’ve known a long time, which can include raging, insults, threats, silence, shaming…. Since Ss are control freaks, they’re more likely to 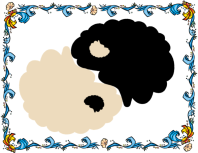 hang on & keep trying to keep you hooked rather than dump you. If you stick to not playing along, they’ll either adjust, withdraw or separate  / leave

1. DO LESS: At first, if the pattern of interaction with a special person is so deeply ingrained & your connection to this S is like your childhood & probably symbiotic – you’re likely to be too mentally confused (T) & emotionally scared (E) to make radical changes (A).

The best thing is to DO LESS of whatever they’ve trained you to do/be, & see what happens. Naturally it will be uncomfortable – not just because of their reaction, but from your own feelings of guilt & fear of abandonment. Remember that guilt is the E. that comes from breaking a rule or law.

EXP: No matter how much effort Anna puts into cleaning & prepping for Mother-in-Law’s visits, the older woman will always find some kind of fault!
IMPLIED MESSAGES: “I disapprove of you when you haven’t cleaned your house ‘perfectly’” (you’re such pig) and “I disapprove of you when you think you’ve cleaned everything thoroughly (I can always find something you missed)

So, finally Anna decides to only do the most needed cleaning & storage, & let the chips fall where they may. (Maybe – give mom something ‘legit’ to criticize?)

2. INTERMEDIATE option
– If you’re young enough to not care what your parents say,
– OR know yourself well enough to have sense of what works for you, you can alternate between the ‘options’ presented in the D.Messages, with the understanding & acceptance that you’re going to get flack either way, BUT YOU’RE OK

EXP b : MASH’s Klinger tried to get out of the war on medical grounds, SO –
X: he pretended to be crazy – BUT was told that –
Y: only crazy people would want to be at war
Result – he was never allowed to be discharged for medical reasons.
NOTE: This is a DM – the word “crazy” being used on two different logic levels. However, Klinger did not fall into the trap. In an impossible situation he chose the ‘crazy’ that suited him & went merrily on his way.