SITE: “My Grandma the Poisoner.

Can NARCISSISTIC ABUSE KILL You?
YES, definitely, both directly & indirectly. A psychopathic & sadistic homicidal Narcissist may also be homicidal, adding to their play bill. And some Ns suffer from Munchausen-by-proxy syndrome (MBP) .
A MBP mother will fabricate symptoms, making her child sick to get ‘supply’. She enjoys repeatedly being in medical environments where she gets sympathy & praise for being devoted to her sick child (proxy = in place of being sick themself).

Often these women are well-read experts on their child’s fake ailments, &   allows them to know exactly what to use to do damage. So they also get a fix from conning smart doctors. For others, the distress they create can be a cash cow for the parent, but turn deadly for the child. EXP: The go-fund-drive online where parents ask for donations for their “sick” child.

a. Accident? Doctors familiar with this disorder say this type of child abuse

has the highest mortality rate, but consider most deaths as accidental, since the usual goal of the parent is to get strokes for being caring, not killing.
EXP: One published case of a mother who put too much salt in her sons feeding tube, killing him. She said her intention was just to make him sick.

However, believing such deaths are ‘accidental’ overlooks the reality of the tremendous benefit of N-supply in the form of gifts & emotional support… this mother receives from her community, when her child dies.

b. Murder. Narcissists love a funeral. Calling such behavior ‘accidental’ also ignores the N’s ability to carry out premeditated killing. EXP: Some use bed-ridden elders as proxies, starving them to death.

c. Suicide. Ns have also been known to murder indirectly, by setting someone up to kill themself. This brings N-supply in the form of absolute power & control 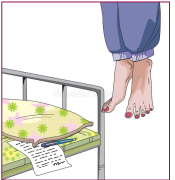 over another person, manipulating their victim to give up the most precious thing they have – their life.

d. Revenge. This set-up can also be the N’s retaliation for some injury to their ego. The victim’s suicide creates guilt & blame in the N’s primary target, such as a grieving father or husband. Then the Narc will use that person’s self-hate to control them.

☠️ When given a chance to escape any type of Narc, don’t walk – RUN.

FROM: L.C.Torres, former Court-Appointed Special Advocate at Child Abuse Prevention Council, San Joaquin County (2014-2015).  Updated April 29, 2020 · Upvoted by Gia Jones, Lived with & loved a malignant narcissist.
🙀       🙀       🙀
Munchausen syndrome by proxy (MSP) is a psychological disorder whereby a pathological narc gets their supply of attention & ‘special status’ by using children, vulnerable adults, even pets – as proxies. Such people set themselves up as someone’s caretaker, then persistently harm the dependent, to either keep making them sick, or actually kill them.

MSP is a relatively rare psychological disorder. It usually affects a primary

caretaker – the mother. But they can also be health-care professionals (nurse, attendant, & rarely a doctor) who cause severe illness in patients not terminal, & then swoop in to rescue, as the hero / angel.

The MSP mother appears to be very loving, sensitive & extremely distraught over their child’s illness, but denies knowing what caused it.
She’s admired for being an exceptionally attentive parent, while exaggerating or making up symptoms, altering tests, falsifying medical records….
OR doing direct damage by such actions as poisoning, suffocating, starving & causing infections.

In her ‘care’, the child keeps on worsening by being subjected to physical abuse &/or medical neglect, usually reported by the parent but not witnessed by hospital staff.
Abuse HINT : The child’s condition improves in the hospital, but symptoms return when returned home.   (More…). Also (Wikipedia ….includes statistics)

😹 A related illness is Munchausen syndrome, where a person continually acts as if they themselves have a physical or mental illness, which they do not – to make people feel sorry for them.
EXP: The case of the young woman falsely claiming she had cancer, even to the point of shaving off all her hair, then begging for & receiving donations to pay for chemo treatments.

NEXT: 60 Common Qs from Survivors

3 thoughts on “NARCISSISTIC ABUSE CAN KILL”