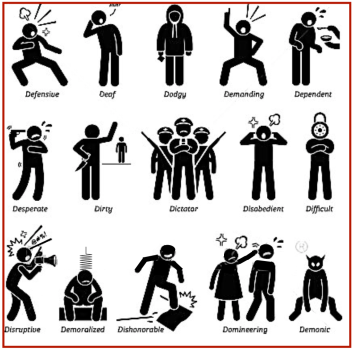 SITEs:  How to Tell if You Are Self Absorbed

As ACoAs, as kids – we had no choice but to become enmeshed with our specific set of Difficult People, brainwashed into accepting their messages without question and ignore the damage it did to us. We were at their mercy, & rarely if ever did we get help to cope with them, or learn how to protect ourselves in healthy ways.

So, it’s imperative to identify & acknowledge what & who we have to deal with, instead of questioning our observation of dysfunction, or denying them completely.

Difficult people (D.P.) are manipulative, controlling & bratty – with most people, most of the time – functioning from defenses developed in response to a damaging background. Internally conflicted, their patterns are usually unconscious. Dedicated D.P. don’t like it when they can’t play out their shtick (pattern), or are called out on their negativity. When they don’t get what they want from one person or environment, they move on to the next innocent sucker.

a. They rarely have empathy for others, &
b. Are always angry OR always miserable
While most people have one or more of the following characteristics – some of the time, in some circumstances – negative personality traits & attitudes of D. P. are entrenched, in the form of personality disorders (More….)
1. It’s all about them = They’re narcissistically opinionated, needing to be the center of attention. Dramatic & fueled by reactions from others – their life is like a soap opera. Asking “How are you?” will open a can of worms, & a story will turn into a novel

2. They’re Victims = They’ve never gotten over trauma – stuck in the past, telling & re-telling stories of pain, failures & guilt. They’ll reel you in by using illnesses, family & tragedy – as a manipulation to make you feel sorry for them

3. They never do a favor without collecting = They’re always scheming to get something for nothing – self-serving, with no shame or compassion. If they do you a favor – you’re going to pay for it, big time. They’ll keep reminding you of what they did & what you owe, even though you’ve also helped them in the past. But admitting that would not serve their interest

4. They’re oblivious = They’re have no idea what’s going on in reality – living in a world only they understand. They’re not dreamers & trailblazers, but rather in deep denial – undependable & irresponsible. They’re so vague it’s hard to have a serious conversation with them

5. They blame, gossip & whine = If they’re gossiping with you about others, they’ll do the same about you. They blame others for their troubles & whine to get attention. They complain about everyone – to you – but put on a big smile for the ones they just trashed.  (modified from Adorablequotes4u.com)

SIGNS of a Toxic Person (the more of these the more toxic)
NOTE – toxic people are not all overt in their treatment of others – like the bully & tanks. Some do it by withholding or being sneaky, but all have a harmful effect on others:

• Only what they think, feel & want matters
• They’re critical, controlling & never consider anyone else’s (your) needs
• They act like they’re fabulous & never make mistakes (perfect)
• The angry ones don’t care about your feelings & like to see you suffer
• They drag up your past & won’t let you be different from them
• They dominate conversations, & leave no room for you
• They spread gloom, & keep disappointing you

• Nothing you say or do is ever good enough 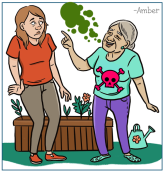 • They violate your boundaries, & never respect your ‘no’
• When you’re around them you walk on eggshells
• You ‘check out’ or ignore your own values
• They make fun of even the smallest actual or imagined flaw
• They leave you feeling guilty & ashamed of who you are
• They leave you wounded = feeling battered, bruised & torn apart