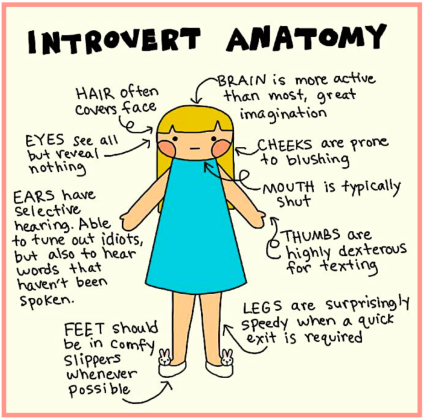 SITEs: Surprising things re our BRAIN

Interesting:
Studies show that the average distribution of extrovert factors varies around the world, such as : people from Europe & the US score higher as Es than people from Asia

b. Parasympathetic NS (Acetylcholine) = Rest & digest. It produces a ’cranio-sacral’ outflow from neurons starting in the cranial & sacral areas of the spinal cord – responsible for the body’s ability to recuperate & return to a balanced state (homeostasis – conserves energy, increases intestinal & glandular activity)

Reminder: The RAS (reticular activating system) is at the top of the spinal cord – in the brain stem – essential to our alert conscious state. It determines our general level of arousal – where someone falls on the extroversion-introversion continuum. Broadly, the RAS in Is has a higher alert setting, making them much more aroused to start with, so need less input from the outside than Es. 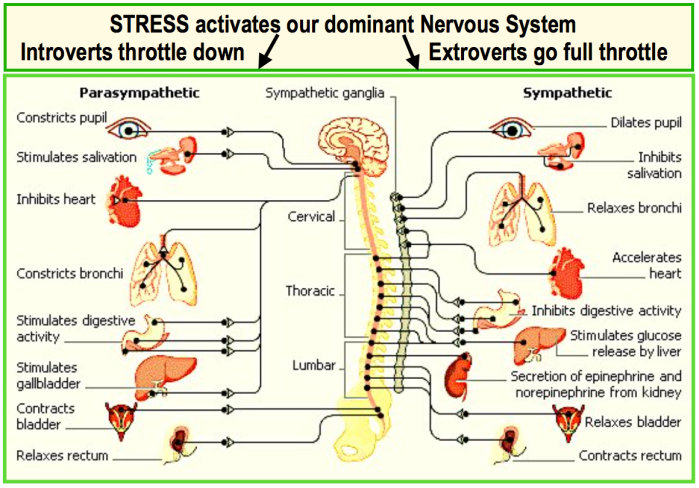 Brain Fingerprinting is a new computer-based way to measure electrical brain waves reacting to words, phrases & pictures. It uses EEGs to identify the ERP known as P30o (P3) , a non-invasive way of evaluating brain functioning. This specific waveform is considered an indicator of human attention, i.e. how fast the brain notices that something has changed. It’s a reaction to decision-making, when doing certain tasks or by a sudden change in the environment.
(by Dr. Lawrence Farwell)

❇ A recent study was designed to see if Es are more sensitive than Is to stimuli in social situations (faces). Electrodes covering the parietal lobe of 28 subjects scanned for P3 waves.
Subjects were shown a series of male faces, & then every so often a female face. They were also shown pictures of purple flowers interspersed with yellow ones.

Those who had previously scored high for extroversion showed a greater P3 response to human faces, but no correlating reaction to flowers. It suggests that faces, & people in general, have more meaning to Es, which encourages them to be more interested in socializing.
Conversely, Introverts – shown the same series of images – had about the same level of P3 responses to both faces & flowers, suggesting their brains treat interactions with people about the same as encounters with inanimate objects.

❇ Another study focused on how the brain reacts to happy faces.
Research has shown that the amygdala ‘lights up’ in response to socially & emotionally meaningful images, & consistently so in reaction to fearful faces – compared to neutral ones. But amygdala results in people looking at pleasant / happy faces was inconsistent.
To account for that, Stanford scientists started by testing subjects on the Big 5 O.C.E.A.N. traits, specifically for Extroversion & Neuroticism, & then showed student volunteers pictures of fearful & happy faces, using brain scans.
FYI: Right amygdala generates ‘negative’ emotions like fear & sadness.
Left amygdala can create both pleasant emotions, like happiness – & unpleasant ones.

FINDINGS
• The amygdala in people with high extroversion scores “turned on” more to happy facial expressions, & more so than to all the other ‘Big 5’ traits, but not significantly to other expressions, such as fear, sadness or anger.
It indicates why more-outgoing people find social situations pleasurable.

• Volunteers with test scores slanted towards Neuroticism (tendency to anxiety, worry or insecurity) had no significant amygdala reactions to any of the emotional expressions. This suggest why up-beat interactions are neutral or unfulfilling for Is – but not WHY some amygdalas under-react.

Reminder: Is are by definition not neurotic, but because of their normal inward-focus, when they are ‘wounded’, some are said to suffer from ‘extreme introversion’ (severe shyness or social phobia) – debilitating conditions preventing them from forming meaningful relationships.