I HATE YOU – DON’T LEAVE ME!
I need you but you’re too close – I can’t breathe

2. ACoAs
Unfortunately, growing up – ACoAs did not originally have that all-important stable core to rely on, so weren’t able to form our own, because of:
• being overstimulated by chaos, emotional volatility & conflict
• being over-controlled, expected to be perfect, judged harshly
• not having role models for self-esteem & appropriate Bs
• not being loved & supported unconditionally

a. Wounded Adults
• Many un-recovered PARENTS are symbiotically enmeshed with their children, to cover their own FoA – ie. both the adults & the kids have similar immature mental drama & temperamental intensity, so they overlap each other, which is emotionally abandoning & terrifying for the children

• These parents are coming from their WIC* ego state, so have:
— weak or no Adult & missing Loving Parent aspects

— weak or rigid boundaries, overlapping child’s feelings, as if the child were an extension of themselves
— a narrow range of emotions available, w/ few nuances
AND
— the focus on their addictions, bad relationships, financial worries, depression, mental illness, relatives, sickness ….
— often changed the rules arbitrarily or made them unreachable, so no matter how hard we tried to obey, it was inevitably going to be wrong – & then got attacked & punished! We could ‘never win’.

✶ As kids, this kept us off-balance so we wouldn’t become independent (& eventually be ‘separate’), which requires being sure of oneself

b. Limiting our Emotions 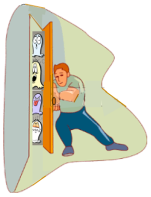 • In an alcoholic, narcissistic family, one or both parents limit or repress the type of emotional responses allowed the children, who are expected to act like adults, both mentally & emotionally, long before maturation.
ACoAs were blamed for not behaving ‘right’,  even thought we were not experienced yet in social etiquette or subtleties, didn’t have enough motor co-ordination, weren’t old enough to actually act like adults!….

EXP: Beth was a pretty little girl who grew up in church. On one occasion her mother was at the dais addressing a group of ladies. Beth was left all alone in the front pew & expected to sit for 2 hours like a perfectly groomed doll. But she’s s normal 4-year-old – bored, lonely & fidgeting. Her mother was annoyed at her child’s ‘misbehavior’, confined it would make her look bad.

She gave Beth ‘the look‘, who immediately froze – terrified – knowing the dire consequences of displeasing, but quick obedience saved her this time. For years afterward her mother proudly liked to tell how the group complemented her, afterward, on having such a well-behaved child – without the mother or anyone else having a clue of the intense fear that generated it!

• We learned very early that our emotions & behavior had global impact – they effected the ‘gods’ badly. Our parents let us know in various ways that we harmed them just by being ourselves (kids)
EXP: A mother repeated remarked : “You’ll be the death of me yet!”

• Many ACoAs experienced being emotionally blackmailed – controlled using fear, obligation or guilt. Our parents’ narcissism & lack of boundaries made it easy for them to:
— treat us the same way they had been – the ‘kick the dog syndrome’, ie. passing on their rage at their parents neglect & abuse
— project their self-hate onto us – they couldn’t face that they were considered ‘bad’ children’ so they made us bad instead – to preserve their fragile self-image

EXPs: “If you loved me…. I made that just for you…. If you don’t do your chores, dad will get really mad at me….
BOOK: “Emotional Blackmail” & “Toxic Parents“~ Susan Forward

One thought on “BOUNDARIES & ACoAs (Part 1)”