I PLEAD GUILTY !
Since everything is about ME (isn’t it?)
– it must be me, I’m always wrong

SITEs:  How to deal with Guilt Trippers
• 3 Types Guilt & How to Let Them Go

POINT 1. Guilt (G) is a normal EMOTION, but not a primary one like anger, joy, sadness.
Since it helps preserve social bonds, a moderate amount of guilt is adaptive. Too much is crippling, repeatedly telling lies trains the brain to ignore feeling bad about it, & not having any remorse is psychopathic.

NOTE: The ACoA focus of guilt is explained in Part 2

POINT 2. Guilt is the emotion mainly related to ACTIONS or NON-actions, but also to ‘unacceptable’ thoughts & wishes

POINT 3. General USES of guilt are for: 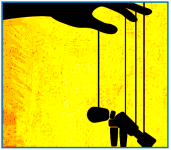 a. exerting influence – G is used by some people in close relationships to control another’s behavior (MORE….)
— the one with less power can get their way by guilting the one with more
EXP: “If you loved me, you wouldn’t do that / would do that for me”
— The one with more power can shame & punish the one with less
EXP: “I guess you mean I shouldn’t have been a mother” when told of old hurts

b. spreading out emotional stress – negative & positive sides of a ‘bad’ situation – acknowledging you’ve messed up, AND showing you care about that person or event
EXP: “If you feel guilty over not taking out the garbage, chances are your spouse–who wanted the garbage taken out–will feel better knowing that. In this way, emotional equity is restored, because bad feelings are restored to the person who caused them,” (psychologist Roy F. Baumeister, CWRU of OH)

c. maintaining relationships – G depends on inter-personal context, a two-person experience, which can help make people pay attention to others
EXP: feeling bad about not keeping a promise, not spending enough time with loved ones, not responding to texts….
Given how uncomfortable guilt can feel, it can provide a strong motivation to apologize, correct or make up for a wrong, & be more responsibly in future

‘Normal’ TYPES of G – in relation to actions, cause by:
a. something you did — wrong. It may be something that harmed another person, it violated your own ethical or moral code, or something you swore you’d never do again. In these cases, there’s no doubt it happened 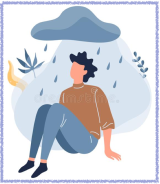 b. something you didn’t do, but want to — thinking a lot about doing something that’s against your own moral code, or is dishonest, unfaithful, or illegal.
This kind of G can be confusing, with conscience poking a finger at you.
Since you didn’t actually commit the act (yet), & no one know what you’re thinking – you’re still on moral high ground. But obsessing about wanting to do something you know is wrong (for yourself or toward others) can make you very uncomfortable

c. something you think you did — A lot of preset-day unhappiness comes from our own irrational thoughts about situations we’re in. Some people will be wracked with G if they’re convinced they did something wrong, even if there’s no objective evidence of that.
EXP: The magical belief you can jinx people by just wishing them ill, without acting on it. If something bad actually happens to them later, you’ll secretly think it was because you were that powerful!  At some level you ‘know’ that’s illogical, but it’s hard to give up the belief altogether

d. that you didn’t do enough to help someone — someone you know is having a hard time or is sick, but you don’t call o check up on them or help in some practical way.
OR – you’re been doing too much for someone, & you take a break or just stop, because you’re burned out (compassion fatigue). Acting out of guilt can only drain you further & end up making you a less effective helper

e. that you’re doing better than someone else — this can be:

— adult children doing much better in life than their alcoholic / narcissistic family, or poorly-adapted immigrant parents, such as going to college, making more money….. even if they say they want their children to succeed

— the only person left in the family after some natural (fire) or social (war) disaster, often will feel survivor guilt, even though the event was totally out of their control. This can have Spiritual implications – they were meant to survive for a reason. 😢