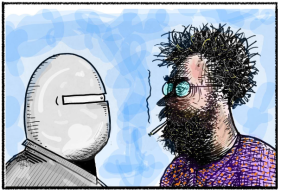 √ CHANGE the SUBJECT
A conversational smokescreen to divert any talk away from what the N did / didn’t do. Most often the redirect lands on one of your weaknesses, since Ns don’t want to be held accountable for anything. Complain about their behavior? They’ll point out a mistake you committed 5 years ago. This game has no time or subject limit, usually starting with “What about the time when you …”

It can also happen when any subject simply doesn’t interest the N,
OR especially anything emotional, such as their Supply crying about a loss or death. N’s response might be “So what the big deal?  / Are you over that yet?”
OR the V making an emotional statement, (“I’m really sad about…. / you make me so angry when….”) N’s response will then be on irrelevant & trivial topics like “So what’s on TV? / What’s for dinner?….”

√ COGNITIVE DISSONANCE
This term refers to mental confusion caused by holding two conflicting beliefs, values, or attitudes. Most people want things to be consist & make sense, so this conflict makes us feel uneasy.

Re. Ns masking their true intensions with a charming facade – designed to gather as much attention & admiration as they can get away with, but which is undeserved. This deception often works because most people aren’t educated about how Ns operate – without empathy or interest in other humans. Instead, ‘innocents’ only see someone who seems sweet & caring.

As a result, Vs experience a good deal of cognitive dissonance. They try to rationalize the “charming, helpful, caring” person against the outrageous & cruel words & actions the N constantly subjects them to. Result : Vs end up blaming themselves.

√ DEVALUE
The N will start their wicked game by taking you to 7th heaven, idealizing you until you’re thoroughly hooked, addicted to their “perfect“ personality.
Then in a blink of an eye they’ll devaluing you with insults, criticizing all the qualities they seemed to previously admired.
A variation: putting you on a pedestal while attacking someone else who threatened the N’s status

& superiority (so you never will)

√ EXPECT you to MIND-READ
The N actually (but secretly) demands that you know what they need, feel & want – without having to ask. They’re too important & god-like to say – you should just intuit it!
Then – when you disappoint (how could you not?), they get very angry & accuse you of not loving them, being insensitive & a bad friends / daughter / son / mate…… They deliberately create situations where you’ll feel guilty & bad about yourself – as a way to “up your game” on their behalf

√ GAME CHANGE & NITPICK
When you’ve obeyed all the N’s rules – been the very best mate / child / employee possible…. then the N changes the rules for acceptability. Even the little things you had corrected to suit them – are no longer valid. You will need tweaking, with new goals set for you.

Constant criticism of things you’re doing that used to be praised – is mentally confusing & causes emotional anxiety. While there’s no ‘logic’ to the new nit-picky judgements demands, the only option is for you to work harder for the N’s approval.

“Bait & switch” is meant to keep you too weak to free yourself, diverting you from your strengths, & pulling you into obsessions about supposed flaws. You end up twisting & bending, trying to fill their every need, which are never be satisfied 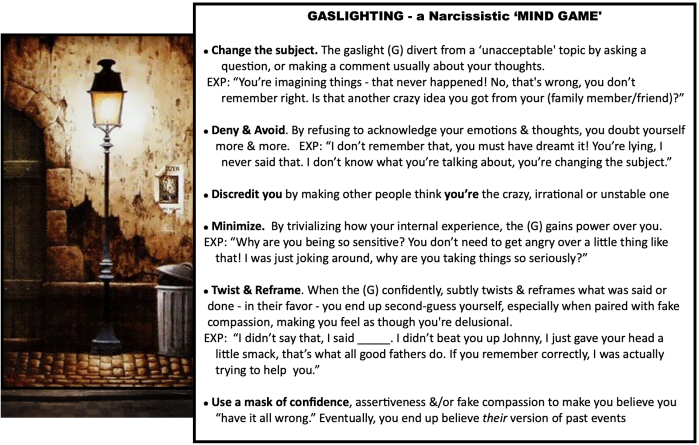 To be actual gaslighting, the motive has to be deliberate, conscious obfuscation – when the person (N) ‘denies’ the other’s experience (V).
It’s a series of mind-games to destroy the Vs memory, perception & sanity. (From the 1944 movie “Gaslight.”). It can be used short-term, to cover some misdeed. But to be effective it usually takes time & a diabolical sneakiness to pull off.
Often it’s done so the N can get their claws on the V’s money & property. It can also just be for the sadistic satisfaction of breaking someone spirit.