🙋🏻‍♀️ SENSATE / THINKING Types (MORE… for the healthy version of each)

▪︎ Destructive ISTPs are cold, self-destructive & indulgent. They can be ruthlessly logical in pursuit of their own pleasure & at the expense of anyone in their way. They ignore their moral compass & have no concern for the welfare or feelings of others. They keep to themselves & scorn attachments to others, only wanting to get ahead or enjoy sensational thrills, even if it harms themselves or others. They’re calculating & selfish, easily angered by anyone who tries to connects with them. Evil ISTPs make perfect mercenaries.

▪︎ Destructive ESTPs chase thrills, opportunities & pleasure, at the expense of anyone in their way. They’re excellent manipulators, who don’t hesitate to swindle, cheat or lie to get what they want. They have no regard for the feelings & values of other, & ignore all moral standards that may cross their mind. Their code is: Life is for taking advantage & living to the fullest, even if it means leaving a trail of broken hearts & wounded souls. They get a thrill out of negative or positive attention, & enjoy bullying or annoying others for the rush it gives them

▪︎ Destructive ISTJs have usually been raised in a corrupt family or societal system, accepting its unethical values & traditions without question, & have no problem forcing others to accept those same principles. Any question, skepticism or defiance is instantly squashed, since there’s only one way to do things – their’s. They’ll destroy people they see as threats, including those who are completely harmless. They want control the outside world, & will try to force it to conform to their routine or set of rules. Their own security outweighs everyone else’s welfare, & they have no empathy for emotions, ideas or rules other than their own.

They’re harsh, aloof & hyper-critical of any procedure outside their set routine

▪︎ Destructive ESTJs are dictatorial, aggressive & controlling. They’re convinced they know what’s best for everyone, & it’s the only way. They deny having any moral compass, disregarding the feelings & values of others in favor of their own rigid views, only trusting their own experience. They push hard to achieve their goals without thinking thru their choices, so they steamroll everyone to get things done, never considering alternate viewpoints or the moral implications of their actions. They may be loyal to a corrupt system or authority, & suppress anyone who questions or stands up to that authority. They make fun of others’ emotions & beliefs, but are free to have temper tantrums & emotional overreactions.

▪︎ Destructive ISFPs are self-serving, judgmental & indulgent. They can easily get lost in self-pity & bitterness over all sorts of imagined or misread slights, flipping from passive-aggressive coldness to self-righteous indignation. They live for the moment & are extremely reckless – habitually over-eating /shopping/ drinking/drugging…. without considering how it’ll affect themselves or others. They’re easily enraged by people who don’t understand their ‘intense emotional reactions’, even tho they’re never actually verbalized. Anyone they let in is at the mercy of their ever-changing moods, & they can decide to shut people out entirely if they can’t get their complete approval. They’re never swayed by logical arguments or reasonable discussion.

▪︎ Destructive ESFPs are impulsive, vain & self-absorbed, chasing attention & sensation at all costs. They hate anything or anyone that can upstage them, but react passive-aggressively toward someone they think may steal their spotlight. Their life is ruled by subjective emotions, & logical arguments or constructive criticism are dramatically avoided. One minute they’ll be madly in love, the next they can ditch a partners or cheat on them, because they ‘feel trapped’. They jump from one exciting thrill to another, without concern for the people they harm along the way 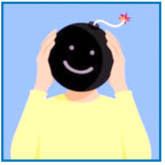 ▪︎ Destructive ISFJs believe everyone must instantly conform to their own form of traditions & values. They may seem friendly at first, but behind a soft-spoken persona they’re manipulative & passive-aggressive. Anyone rebelling against tradition or interrupting their rigid routine will get shut out without a second thought, or sneakily get the ‘offending’ person punished in some way. They only do nice things for people to be validated & praises, but hateful when they don’t get the positive reaction they were expecting. When anyone questions them, they retreat into self-pity & guilt trips. They’re hard workers, relentless in their sense of duty, even if it’s to undermine authority or corrupt social structures

▪︎ Destructive ESFJs are manipulative, controlling & prone to gossip. They take on the beliefs of those around them, & bully people who function outside that value system. They’ll mock, ridicule or gaslight anyone who doesn’t follow their traditionally accepted views or doesn’t follow ‘the rules’, even those that are corrupt. They’re “teacher’s pet”, constantly trying to get praise from everyone, especially someone they respect, & will have a pity-party whenever they don’t get it. They easily get enraged about any imagined slight, or anything that takes attention away from themselves. They love to spread rumors if it helps gain approval from authority, being passive-aggressive, two-faced & dishonest.