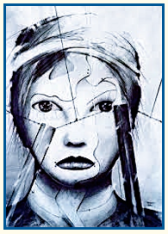 SITEs: “Confessions of a Sociopath…..”

• When a Christian meets a Sociopath
(excellent info for anyone spiritually oriented, no matter of what ‘faith’)

• fun, entertaining, super polite when meeting people
• an excellent story-teller, presenting self as the hero with high standards
• is a user, taking a lot from & gives back very little
• never takes responsibility, but turns the blame back on others
• lacks realistic long-term goals, always scheming but usually failing
• has several short-term relationships or marriages

AND:  Sometimes you suspect they don’t really care about you!
SITEs: “S. def & signs” // “4 Phrases S. use to kill your confidence

(S) EMOTIONS (cont.)
• They can be afraid – which leads some to isolate themselves
• They’re volatile – prone to emotional outbursts, including fits of rage
• They can feel some caring & guilt, but over all, those emotions are not strong enough to prevent them being overpowered by the S’s impulsivity & erratic behavior

• Many writers say that Ss can’t make emotional connections at all, & this is true to some extent, but is usually when Ss& PSs are lumped together. It’s true that Ss have no regard for society in general, & won’t feel guilty when harming a stranger or breaking the law in any form.

However, some Ss can become attached & develop loyalty to a like-minded person or group (mentor, gang, parent they’re symbiotic with – no matter how abusive….), so the S. may feel remorse if they do something to hurt those special ones.

(S) SOCIALLY
Sociopaths’ disturbing traits may have been visible from childhood in acts of cruelty to animals, property or people. They make up about 4% of the world’s population – people who ruin lives, causing extreme emotional trauma – simply because they don’t care. They disrupt relationships, create financial & emotional crises. At worst they perpetrate vandalism, theft, rape or murder.

Sociopaths know exactly what they’re doing & know the difference between right & wrong – technically – but can’t judge the morality of a situation because their inner ‘compass’ is skewed. They’re social predators who exploit just about everyone they deal with, altho most of them never kill anyone. They have no heart, no conscience & no remorse. Even tho’ their attitude toward others is not necessarily malicious, the outcome of they behavior is, since they treat people as objects.

The very clever ones make great con-men & women, able to act sincere in a way that can fool others into believing they have the same values. Instead,  they’re conniving, deceitful, often pathological liars, despite seeming to be trustworthy & sincere. Without empathy, they take no responsibility for their actions, & can easily turn the tables, accusing the other person for causing their misery, without guilt or shame.

They are great actors who can mimic emotion & empathy, masters at superficial pleasantness & manipulation – but instinctively ruling by fear, whether at home or at work. This is why they can be so successful in their career – it helps to look the part while not really caring about other people’s feelings. Alternating between charming & terrorizing others makes it hard for family or work staff to point out their abusiveness & stand up to them. It’s theorized that the top of the corporate food chain has a higher than average number of sociopathy than the general population. (MORE…..)

Since sociopaths (& psychopaths) are absolutely sure there’s nothing wrong with them, they are not ‘curable’ – so it’s a waste of time to try. The only option in dealing with them is to insist on limits to their actions, OR just staying out of their away.
SITEs: “How to beat a S. at their own dating game”
• “6 things to know about dating a sociopath”
• 5 Things Ps & Narc. do in conversation 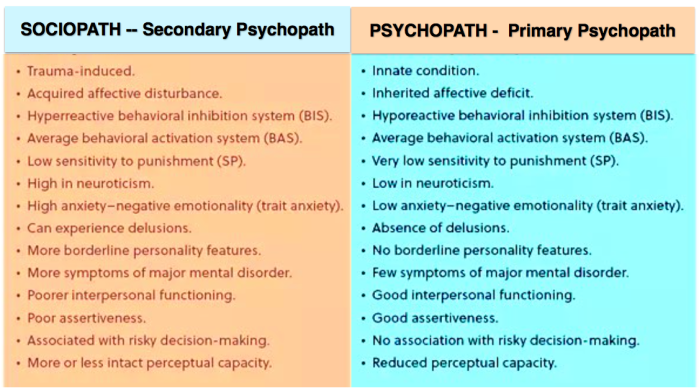