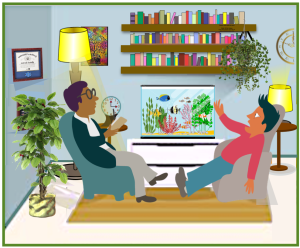 I’M NOT AS MESSED UP
as some people I know!

SITEs: “Why being neurotic could actually be a good thing”

2. NEUROSES – now called “depressive or anxiety disorders”, are a group of mental dysfunctions which do not interfere with a person’s ability to think rationally or function day-to-day, but definitely cause distressing anxiety.
PSYCHOLOGICAL
• Freud said they’re a result of an extremely painful experience earlier in life, which was never processed consciously (rape, witnessing a traumatic death, attacked by a person or animal….)
• Jung added they’re cause by a conflict between conscious concerns (like obligations) & unconscious content (unacceptable thoughts, wishes, emotions….)

Trait Neuroticism (TN) one of the 5 personality components of OCEAN.

All vertebrate animals – including humans – have a “negative affect system” to avoid negative/punishing situations. TN includes individual differences in sensitivity & activity of this system, ie. how painful someone’s emotions are & what kind of responses they have to upsets (affect=emotion)

People high in TN are more likely to develop depression & anxiety, especially when exposed to ongoing stressful living conditions without having the skills to process their distress in a safe, validating interpersonal environment. They can either avoid the disturbing person/situation, or shutdown from frustrated needs & losses. AND they can either turn their pain in on themselves, or turn it on other (S-H or attack). https://www.psychologytoday.com/blog/theory-knowledge/201702/trait-neuroticism-and-depressive-and-anxiety-disorders

MEDICAL/SOCIAL
• Scientific studies have found a correlation between a specific human gene & its corresponding allele pair and neuroticism. These cell components help to control the amount of serotonin released into the body, which when delivered unevenly, will continue to stimulate surrounding nerve cells, causing neurotic symptoms (anxiety)

• Not surprisingly – a 1998 study of over 9,500 UK residents found a higher number of neurotic disorders among poorer people. It’s possible that genetic factors predispose an individual to anxiety & neurosis, with outside factors 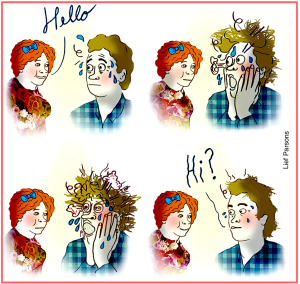 IMP: Neurotics have a consolidated identity (not fragmented – being mostly in touch with reality), are well aware that something’s wrong (unlike PDs & psychotics), & can use ‘normal’ defenses (like CDs).

• With neuroses (n.), only a part of the personality is effected.  A person confronted with their feared issue (big dogs, snakes, airplanes, clowns, public speaking, visiting family….) will inevitably have an intense desire to avoid their specific issue. But their way of dealing with it is maladaptive, ie. the response ultimately moves the person away from their long-term needs (feeling safe) & goals (achievements).

• Re. traumatic events – without psychological & spiritual help at the time of the originating stressor (rape, severe accident, death of parent, best friend, classmate….), the unconscious suppresses unbearable emotions, & sometimes even the memory of the event. Whether the person remember or not, their nervous system continue to experiences it as it did originally, becoming an ‘invisible injury’. This makes dealing with their specific fear very difficult, while others parts of their life function relatively well. (MORE…..)

Beliefs: (‘verbal cognitions’), rigid & deeply protected theories about ourselves in the world, developed to justifying our actions/reactions
Defenses: trying to manage the tension between conflicting internal goals, & filter unacceptable ‘stuff ‘ out of full consciousness, but doing so at significant cost
Emotions: generally are either over-regulated (suppressed & not expressed) or under-regulated (hyper-sensitized & over-expressed)
Habits: automatic or ritualized patterns of visible actions used to alleviate anxiety & provide a sense of security
Relationships: adopting rigid styles of dealing with others, or having extreme reactions when not getting the connection they want/need

NEXT: Psych Disorders #3b