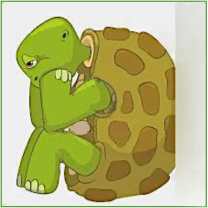 🦨 If You’re Not Good, Santa Won’t Bring You Any Gifts
It’s both a bribe & a threat – a terrible way to get a child to behave. It makes being loved (the gifts) conditional on the child’s actions, rather than being loved unconditionally. An easy game to play for the month of December

🦨 Go Ask Your Mom / If Your Dad Says it’s Okay
When a child asks one parent if they can do something, or if they can have something, & that parent refers them to the other one, shifting the burden of responsibility so they don’t have to be the “bad guy” or say the wrong thing. They leave it up to the other adult to either please the child, or disappoint it. It’s a mean game to both child & other adult

🦨 What Would Your Father / Mother Say?
This game is both —

— a way to shame the child: ”What would he/she think of you if they know what you just did/said?” (“he/she won’t love you any more”), AND
— again, pitting one parent against the other, A using B as a threat & judge, so A can shirk parental responsibility

🦨 Just Wait Until Your Father Gets Home
This game is gender-specific, making the male parent the ‘more dangerous’ one – not universal, just more common. It unfairly, unnecessarily makes the child afraid of that parent, who is being used as a threat.
If mom (A) is home when a problem comes up she should deal with it immediately herself – if possible. Making the child wait for the other parent to dole out discipline or punishment is both unfair to dad (B), and a torture for the child

🦨 Why Can’t You be More Like Your Sister (cousin, movie star….)?
This one is down right evil – negatively comparing one child to ANYone else. Rather than involving the other parent, it adds fuel to the horrors of sibling or peer rivalry.  It can involve 2 girls, 2 boys in the same family, one child & a cousin or other relative, or the child vs. an idealized religious or media figure (“What would Jesus do?”, or why can’t you be more like Cindy Crawford? )

y’re unacceptable & therefore unlovable. It can be made into
— a competition (he’s getting good grades / she doesn’t give me any trouble…) OR
— a comparison (She’s so quiet, elegant, obedient, respectful)
Either way the “imperfect” child loses – developing S-H, as well as resenting / hating the other child or person

🦨 If You Don’t Look After the Pet, We’ll Get Rid of It
This is another destructive game. Not only does it hurt the child, but it ultimately the pet. Children should NEVER be told they’re 100% responsible for pet care. They cannot be asked to accept a lifetime commitment, & many pets will not be taken in by others when they’re no longer little & cute, so they’re often euthanized. If parents can’t handle the responsibility, they shouldn’t get one

• This game definitely destroys a child’s sense of trust, safety & innocence. It also damages their understanding of responsibility, even their ability to maintain a relationship later in life. After all – their own parent showed them that all life, all commitments, are disposable!

SHORT FORM of DMs – with Medical examples:
1. Explicit (direct): If you take some Action, you’ll be punished
>> You go to the doctor with serious symptoms, & told you should have come in sooner