QUOTE: “He who angers you, controls you!”

ANGER
💚 is inherited
TRUE –  but only partly. Our responses to emotions are complex, a combination of inheritance & mimicry. Genome decoding has revealed a connection between the MAO-A gene & aggression in humans. So some people are more easily triggered & may feel anger more intensely.

✦ However, research also tells us that people are not born with set

& specific ways of expressing anger (actions/reactions) – which are learned – so we can improve the ways we behave
✦ We know that children internalize ways of thinking & acting by watching & listening to their family & society. Angry parents often have angry children, but this outcome is not inevitable

🔐 is a legitimate way to get people to listen, give respect & obey us
False: This is how bullies think.
Anger is indeed used by top sale people, CEOs & narcissists – even when they’re not actually angry – used to manipulate, intimidate & control others, which is aggression (abuse).

Expressing ourselves in a hostile way will only make people dislike & distrust us. Others are more willing to listen to our opinions when they’re treated fairly & spoken to with respect. So if you’re someone who is truly respected you won’t need or want to bully to get attention. 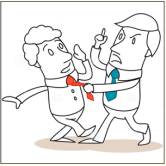 t ACoAs confuse assertion with aggression
Aggressiveness is used to harm, dominate, intimidate or injure another. The goal is to “win at any cost,” with no concern for others’ well-fare
Assertiveness is when we express our opinions &/or emotions, such as anger, in the ‘I form’ – which is honest & respects others. We don’t have to accuse, blame or threaten, so we minimize the chance of emotional harm.

ANGER
🔐 will destroy a relationship if expressed to someone we love
True: It can do severe harm if —
✦ the way anger/rage is ‘vented’ is abusive, especially if it’s repeated over time
✦ OR the loved one is intensely narcissistic & won’t tolerate any form of ‘disapproval’
✦ OR is so co-dependent, insecure & fearful that they’ll take our anger as a sign of personal rejection rather than a statement of our feelings

False: because Anger – not aggression – is a way to have boundaries in a close relationship, and

is a sign of genuine intimacy (in-to-me-U-see), rather than hiding parts of ourself out of fear of abandonment.
When we know we’re angry about something our loved one did or didn’t do, & choose to express it in healthy ways, it can actually increase mutual understanding & help enrich the relationship    (MORE….)

🔐  is bad, therefore must be eliminated
False: It is neither good or bad but rather a strong energy with a specific purpose in our psyche. Again, the anger itself is not the problem, only the we express it (verbally/ physically).
Parents who themselves were taught that all anger is bad/evil, & then pass that on without question, teach their children to stuff, repress or totally deny their anger.
EXP: “Don’t take that tone of voice with me, young man!” or “If you’re going to act like that, you can go to your room!”

True: ONLY when acting it out incorrectly, which can lead to domestic violence, property damage, sexual abuse, drug addiction, ulcers, self-mutilation, suicide……

🔐 is healthy when expressed by children (as tantrums & other uncontrolled forms….) –

because it staves off future neurosis
False: No – because when it’s willy-nilly, it teaches the child they can spew their rage onto others whenever & where ever they want – & sometimes hurt themselves. Actually, tantrums lessen when they’re ignored, not reinforced, or when children are expected to talk about & own their emotions

True: Yes – when the child is guided safely to express their frustration, hurt or fear which generate anger, by using words & physical movement, (anger-work such as pounding pillows), so they learn that they can have strong ‘difficult’ emotions & know how to get them out in the right way.