TAKING THE TIME TO PLAY
is needed by all adults

QUOTE: “Surround yourself with people who take their work seriously, but not themselves, who work hard & play hard.”  ~ Gen. C Powell

PLAYING: “Most importantly, the activity should not have an obvious function in the context in which it is observed – meaning that it has no clear goal.”  Scientific American

Animals and Humans
Jacob L. Moreno 1889-1974), the father of Psychodrama, wanted to be remembered for bringing laughter into psychiatry. He said that happy people tend to play a variety of roles allowing for rest, relief & rejuvenation, which increases spontaneity & creativity.
If “the un-examined life is not worth living” (Socrates), then “the un-lived life is not worth examining!” (Zerka Moreno, psychodramatist)

• Humans become more successful adults when they had the freedom to play as children. “Welcome to Your Child’s Brain…” tells

us that play activates our brain’s reward circuitry, but not its negative stress response – so it encourages attention & action (Dr. S.Wang & Dr. S.Aamodt,  2011)
> Through play we learn to: Analyze, Evaluate, Hypothesize, form and substantiate Opinions, Question, Predict & Persist through adversity.

• Play is widespread among all non-humans, beyond the familiar cases of mammals & birds, to vertebrates & even invertebrates, from lizards to squid.
Play helps all species learn adaptive behaviors that increase their chance of survival, & provides:
> a safe way to release aggressions
> time to learn adult behaviors

INDICATIONS of animal play – IT:
1. resembles a serious behavior, like hunting or escaping, but by young animals, & is awkward, exaggerated or modified
2. has no immediate survival purpose – voluntary & seems to be done for its own sake (pleasure)
3. is usually seen when an animal is not under stress or doesn’t have something more ‘important’ to do (eating, sleeping or mating)

TRUE STORY, from Stuart Brown, pres. of the Nat. Institute for Play:

In a Northern freezing wasteland of snow & ice, a polar bear stalks a line of sled dogs. The bear picks out the last in the line & begins a predatory stalk towards her.
Onlooking breeders & trappers watch in horror as death slinks towards one of their prized dogs, & no one has a gun to defend her. The doomed dog turns & bows before the bear.

• But this is no bow of submission. She raises her rear high in the air, face smiling, tail wagging in a “play bow.” The bear rears up on hind legs & pauses in slight confusion, then bows down & begins to play with her.
They enjoy a raucous romp in the snow, tumbling, nipping, yelping & chasing, before the bear finally gets exhausted & leaves. The bear comes back every day for two weeks to see the dog AND play!

Play, creativity & flow.  Psychiatrist / author Mihaly Csikszentmihalyi coined the idea of “flow state” (in the zone), having studied play extensively searching for things that contribute to a life worth living 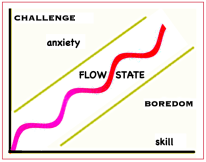 He explained that to be in flow, PLAY has to have just the right balance of difficulty & ‘solvabity’. If the game is too hard or too easy it loses its sense of pleasure. All participants, regardless of age or ability, must feel challenged but not overwhelmed

• Having at least one activity we do regularly just for fun is important for our ‘happiness quotient’. When we get really engrossed in an enjoyable activity, it puts our brain in a near-meditative state

It can sharpen many skills, express creativity, help solve big problems, or just blow off steam. Sometimes the best way to learn a complicated subject is to play with it. ALSO – physical play delays mental decline in old age.

> Delight – sense of bliss & positive detachment from everyday reality
> Involvement – complete focus & concentration, due to innate curiosity or to good training
> Motivation – intrinsic understanding about what needs to be done, & a desire to keep the momentum of play going
> Serenity – sense of peace & absence of worries about oneself
> Timeliness – thorough focus on the present, & lack of attention to passing of time