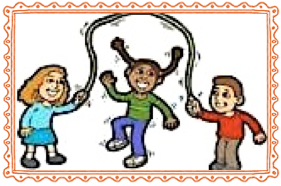 I WANT TO PLAY WITH MOM & DAD
but not too much!

5. Associative P.
When children start to see the value in playing with others, but test their boundaries. They don’t ignoring their own interests, with a mild attempt to control who can & can’t be in the group. They’re involved with what the others are doing – all play the same games, talk about what they’re doing, borrow & lend play things, follow each other with trains or wagons…. without assigning tasks & materials, or choosing a goal. They may alternate playing with others & then on their own

• Cooperation (if we work together we can make our city even better!)
• Language development (what to say to get their messages across)
• Problem solving (how can we make this city bigger?)
• Socialization (what should we build now?)

6. Cooperative Play
When children focus on a joint effort rather than on themselves, bringing together all of the social skills they’ve been working on, and putting them into action. Play is organized to:
— make a tangible object, reach a competitive goal, dramatize situations of adult & group life, or play formal games.
At this level there’s usually one clear leader, play is structured, & they work together toward a common goal. This can cause conflicts, but can be resolved quickly

Co-op Play allows mastery of important new social skills:
• Obeying rules: Most want very much to win, even if it means cheating
• Negotiating: Must learn to give as well as take, to compromise on what they want – hard to accept

when you’re the ‘center of the universe’

• Sharing: When little ones want something, the thought of giving it up to someone else is almost unbearable. It’s made harder by the confusing use of  ‘share’ – some things you’ll get back (a toy) some things you won’t (a cookie)
• Taking turns: their desires are urgent and immediate. “I want it NOW.” Delay gratification is required, & being able to imagine what it’s like being the other children. Empathy already learned (hopefully at home) and during parallel play will help

> This stage may be seen in younger pre-schoolers as well, if they have older siblings or are around a lot of other children
• 4 – 6 yrs. old : They plays cooperatively, take turns & may enjoy table-top games. Start to understand & use symbols (for writing and reading).
Are better able to reason & figure out their experiences. Begin to understand simple rules in games
• 6 – 8 yrs. old : They like to play with children of their own gender. Enjoy playing co-operative games in small groups and making up their own games with rules, but usually don’t cope well with losing

start from the position that you are not deficient, even if the WIC doesn’t believe it, yet – but rather how you were raised.

Using Part 1 & 2, WRITE what you can about your play history. With the limitations & stressors of your childhood in mind:
• List what you did get to do at each stage, what you missed out on, & how each one turned out / affected you. How did each kind feel?
• Given your present-day patterns, are you struggling with one or more?
• Identify if & how you’ve added healthy playing to your life in the course of Recovery (review the DEF of Play).