I HAVE A RIGHT TO BE HERE –
I feel safe & loved

The TIES THAT BIND
• Having boundaries (Bs) is the opposite of being enmeshed (symbiotic)**. Humans are not born with Bs, & have to develop them with the guidance of healthy nurturing, so the main caregiver (usually the mother) needs to be a secure base from which the infant can safely explore its environment.

A well-grounded mother experiences the child as separate from herself, although from her body, so even if she’s anxious or sick, is able to be nurturing because she finds the helplessness & needs of the baby irresistibly appealing. She is not overwhelmed or put off by them, like in alcoholic / dysfunctional homes

• With the proper care, gradually the all-consuming ME of the child will separate from the NON-ME (all others), & personal boundaries are formed.  Being given a solid foundation is crucial before the age of 9 or 10, as by then our defense mechanisms are SET, & a bad beginning will generate a harmful crop of ‘negative

protections” that are hard to change

**Symbiosis: At birth: “….is experienced by both the mother & child as a temporary merging or sharing of their needs”, an important early phase of omnipotent fusion (very deep) between the two, In a safe environment, this merging is gradually given up by the child over a long process of S & I.

This infant’s experience is: I cried, I got fed, aren’t I great! This sense of invincibility is alternately —
— ascribed by the baby to the grandiose Self –> “I’m all-powerful”
— & about the idealized mother/caretaker –> “She’s all-powerful”
As the child separates & internalizes the parent, IF it’s a loving, healthy experience, he or she can safely become their own person, with a sturdy sense of self-hood, along with a Positive Introject

•  When this satisfying connection is not available or not adequate for the child, it spills over into adulthood, so that in unhealthy relationships: “…. symbiosis is still going on, occurring

when two or more individuals behave as though between them they only have one complete personality….”, rather than being 2 separate people.

Neither have a full complement of ego states, so that one person acts from their Adult & Parent while the other only from their Child part – forming one false ‘whole’ ‘between them.
This is why it’s so hard for co-dependents to leave what others may see as destructive attachments – they would be cutting off a ‘part of themselves‘ since they haven’t yet grown their own complete identity.

1. Normal Development
• Children are highly intuitive, intelligent & curious. But at first they experience little difference between Self & others, between inner & outer, fantasy & reality.  The work of Mahler, Kernberg, Hartmann, Spitz et.al. identified 3-4 important developmental stages – not in a straight line but more like a fluctuating helix:

i. Autistic or Undifferentiated = in the first month of life, during which the infant is in its own inner world, with a minimum awareness of ‘others’, focused on reducing physical (hunger, wet diaper…. & emotional tension (fear, uncertainty, loss….)

ii. Symbiotic = for the next 4 months, the infant becomes more aware of the mother / caretaker as the source of fullness & warmth, but not as a separate person

iii. Separation-Individuation (S & I)  = made up of a series of sub-phases, thru the 3rd or 4th 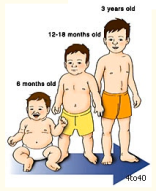 years of life, when the child begins to investigate the world beyond its own body through sight, locomotion, language…. & later, conflicts with mother about needing her vs. needing some independence, which requires much help in balancing

iv. Object Constancy, developed during the S & I period (if allowed!) around age 2 1/2 to 3, when the child is capable of experience both the good /providing & bad /withholding sides of the mother as one whole, as basically dependable & trustworthy, not perfect but not dangerous — assuming she’s mentally & emotionally sound! (MORE….)