❧ INTIMACY
Genuine intimacy includes trust, understanding & being understood. It relies on endurance, safety, mutuality, respect & transparency. Without appropriate self-disclosure, there can be no intimacy. Anyone in an intimate relationship (beyond sex) can reveal vulnerabilities without expecting it to be used against them.

People with personality disorders (PDs) are afraid of mature intimacy – which requires genuine emotional involvement & being honest with oneself, which N’s are not.
Un-‘educated’ partners of NPDs confuse intimacy & intensity. Ns are extremely good at giving the appearance of intimacy, but can turn it on & off as it suits them. When they’re needy, they offer such a  good fake version, which is very appealing, that it’s hard to resist. But when they’ve gotten their hit, they immediately go back to being selfish. Ns are the ultimate users.

Generally, Ns are extremely uncomfortable when ‘normal’ people try to bond with them

(neuro-typical significant others = NT S/Os).  So Ns may not recognize that this is the “push” trigger that starts them devaluing the partner or friend, who will never be able to convince the NPD that their fear of intimacy is at the heart of their relationship-problems.

PROCESS of DEVALUING a relationship
💌the N meets a S/O who has the ability to provide the kind of love they crave
💌 the infatuation / idealization phase gets set in motion
💌This creates a euphoria from powerful neuro-chemicals that anesthetizes the N, which temporarily dampen their  reflexive instinct to throw up narcissistic defenses.

📭As the relationship continues, the N’s high wears off (the end of infatuation phase) & they return to their ‘normal’ unhealthy state

🎈Since the S/O (unaware of the N’s internal change) continues to offer unconditional love which the N didn’t get from their parents in childhood, & so can’t trust that anyone else will ever provide

🎁Mature intimacy offered by the S/O comes with the inevitable traveling companion of “vulnerability”, which NPDs cannot tolerate. It exposes old abandonment pain & the fear of future loss, which they’ve never learned to face & deal with (POSTs : “What Recovery Is / Isn’t“)

TRIGGER ALERT
💔 The N is subconsciously triggered when they start to FEEL emotions that come from someone loving them, which are are new & so alien that it causes a great deal of confusion. They feel intimidated & overwhelmed

🤎 This subconsciously sets the N on high alert, potentially being ‘forced’ to 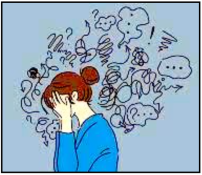 😱 In this state of hyper-sensitivity the N can start to experience mounting anxiety, despondence & irritation, with a sense of impending doom – without understanding why

⚡️Before long the N is caught up a Category-5 emotional hurricane of rapidly changing feelings, attacked by the stinging rain of vulnerability-terror

⚡️They’ll convert “softer” feelings toward the S/O into anger, & possibly hatred, with a stronger & stronger urge to get rid of the source of the pain

⚡️The N’s maladaptive defenses prevent them from distinguishing friend from
foe, so they act against their own best interests.
Their subconscious starts whispering an endless stream of self-hating & paranoid intrusive thoughts ➡️, which convince the NPD-sufferer to accuse the S/O of

⚡️The tragic twist is that it’s the S/O’s love that inadvertently triggers the N, by providing them with the very thing they’ve always wanted – mature adult intimacy – but which they’re terrified of trusting in

⚡️Unfortunately, since the N is not consciously aware of what’s going on inside, they inevitably push the S/O away, unable to recognize that their misery has nothing to do with the S/O, who’s done nothing wrong

💔Pushing away people who are truly capable of psychological / spiritual intimacy & love leaves the N even more deprived & ‘starving’, but provides temporary relief from intense anxiety, feeling elated & relieved after unshackling these ‘chains’.
This may temporarily set off depression & isolation, but eventually their emptiness can push the N to start the cycle all over again. Unable to be their own healer & comforter, they need to use other people to “feed off of”.