Skip to content
HomeMASLOW’s pyramid of NEEDS – Actualize (Level 5b)

Self-actualizers (SAs) are people whohave shed much of their unhealthy attachments & expectations, liberating them to enjoy flexibility & spontaneity. And because they focus more on their inner-guided purpose in life, so are able to leave wonderful & beneficial legacies.

SAs are not so concern with taking credit or casting blame. They don’t waste a lot of energy judging others, since they’ve come to understand the beauty & suffering of the path everyone is on.

While achieving SA goals is not ‘required’ for normal psychological development, it is required to be ‘fully-realized’. And even though these needs can never be totally satisfied, any gratification that is

gained from ones efforts can spur people to keep on trying.
When motivated people do reach a specific big goal, they usually come up with a new one to work toward. But it’s also important to savor each success before setting off on a new adventure

Maslow noted that Self-actualizers often feel saddened, exasperated, even enraged by the shortcomings of the average person, which can be such a nuisance that it sometimes makes SAs bitter (1970)

• Accept Reality: SAs can correctly evaluate & have an easy acceptance of Self, others & nature – without complaint, guilt or shame about limitations or shortcomings, & so are able to be gently honest with everyone. They aren’t confused by any disparity between the truth & an idealized self-image

• Appreciative: SAs have a sense of appreciation, wonder & awe about the world – the innocent way happy children do. Even simple things can be a source of inspiration & pleasure, so they don’t get jaded or bored with familiar experiences.
They can get very absorbed by & extract deep richness from subjective experiences, which can involve music, sexual enjoyment & appreciating beautiful things in nature

• Autonomous : SAs are self-contained, & confident in their own judgment, without having to lean on others or the outside world. 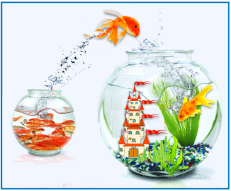 Because SAs are driven by growth rather than deficiency needs, their sense of satisfaction comes from continually improving their life, as a result of their efforts
(<— a SA goldfish 😄)

Having grown strong enough to be an ‘inner-individual’, they don’t need others to keep providing the normal human requirements of earlier levels, because they already they have enough & can add to them whenever things change.
They make up their own mind, having more free will than most people, & don’t need to convert others to their way of thinking or doing

• Creative : Altho this is part of every human interest & activity, level 5 creativeness is a special type – like the inborn, naive imagination of children – the sky’s the limit! While most adults forget to use this natural talent, SAs keep trying new things instead of getting stuck in a rut

• Democratic : SAs are friendly toward & interact with just about anyone, without concern for differences in class, education, race, color, religious or political beliefs. They’re likely to protest against evil & tend to be less ambivalent or confused about their own righteous anger

• Discerning: SAs rely on their own judgment & intelligence to form opinions about people, situations & things, & are not easily influenced by external social trends or pressures

• Ends, not means: SAs focus on where they want to end up, rather than getting caught up in means – the ‘how’. Most adults can’t seem to choose a goal before listing what resources & skills they have in order to move forward. These become screening devices used to decide what goal to try for – which severely limits their options

This is the opposite of how children operate – they want something & then figure out how to get it!
That’s exactly what SAs do – being open-minded, goal-focused, & willing to risk trying, the ‘means’ evolves in the process of doing

• Ethical: SAs are confident in their evaluation of what’s right & wrong,   knowing the difference between good & evil, so are not confused or inconsistent about moral issues – not hypocrites. They’re aware of the ethical implications of all their actions

• Growth oriented : SAs are always looking for opportunities to improve themselves & their environment. They know it’s a life-long process, have the courage to tackle the hard parts & try new ways to resolve obstacles