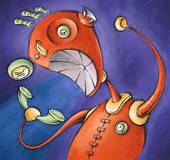 TOO MANY THINGS
can go wrong every day!

MORE Anger Triggers, coming from other people or circumstances
Noise • construction, babies crying, dogs barking
Overload • when too many stressors happen at the same time, so our coping capacity is exhausted (caregivers, working mothers….)

Pet Peeves • lazy, sloppy, dirty, chaotic people or places
• violation of personal rules/ values
• social irregularities, political issues
Powerlessness
• not able to fix or change someone/ thing that hurts us (so we don’t have to leave) 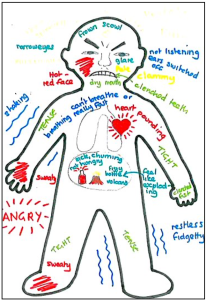 STUFFING triggered EMOTIONS
Life is made up of energy ebb & flow, expressed, contained or withheld.
We take in – food, love, nature, beauty, affection….
We let out – art, exercise, emotions, sex, sports, talk…
…. a cycle of building & discharging vibrations, which only stops at death,

Relaxed muscles are in low energy, but anything that’s a road block keeps us tense. High energy that’s not moving tightens the muscles. People who are very afraid – will unconsciously hold their breath, so the lungs are always over-inflated, making them sigh a lot.
When energy gets either too high or too low, people get more & more anxious. Then they have to find ways to dampen it or pump it up (over-eating, compulsive sex, fighting, smoking, drinking….)

• Our society (& unhealthy families) tells us what we’re allowed to express, & to ‘control’ how much to let out. We’ve been taught to be afraid to show anger, loneliness, fear, mourning, insecurity – even too much joy or excitement (except @ sports or concerts)….. told to “calm down” & contain emotions rather than letting them out in healthy ways.

The energy of each unexpress

ed emotion gets stuffed into an imaginary POT. One way to tell how full it is – is noticing the tension in our muscles – tight jaw or shoulder muscles, having IBS, overall stiffness….

Al Turtle’s CHARTS starts by assigning each ‘provoking’ external event as 5 units, with a corresponding emotional response of 5 units, & then going up from there: trigger 50 = response 50, 500 = 500….
He calculates that by the time we’re age 20 most of us have at least 35,000 units of backed up energy in our bodies, which can take anywhere from 20 to 80% of our calorie intake – just to keep it all inside the POT.
No wonder we’re tired – suppressing emotions takes a great deal of effort, piling up until we implode (depression) or explode (rage)

Re. Anger – usually the amount of anger felt is proportional to the provocation (trigger), so the larger the input (stressor), the larger the output (emotional intensity).
A child will explode as much as it needs to, then it’s over, & they stop. This is normal. But adults have learned to cut so many feelings off from themselves.

When we have a very full POT, it doesn’t take much of an external trigger (5 to 10 units worth) to set off a very big response (100 -1,000 units)! So a little thing that would “justify” a little anger often results in a huge amount of expressed rage.

RELIEF – The ONLY thing that relieves suppressed emotional energy is venting it appropriately – as a way of ‘completing’ / ending the emotion – so it does’t hang around. Nothing else works.

Regularly emptying the POT (a little at a time!) actually gives us more energy because we’re releasing the tremendous effort needed to hold it in.
Many of us are not aware of how hard we’re working to sit on emotions, because consistently tight muscles become numb after a while. That’s why doing emotional-release body work is so important as part of Recovery.