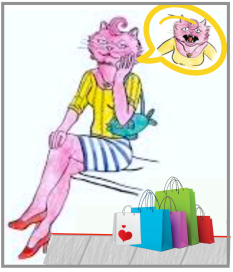 THESE last categories will be the focus of the rest of this series, so here will only be briefly summarized.

3. DESTRUCTIVE
This group has abusive attitudes & behaviors that harm self & others.
They devalue, lacks empathy… & create frustration in almost everyone who has to deal with them.  This is an easy way to identify them – by the negative reactions they create in others, similar to NPDs (Type 4)

UNPRODUCTIVEs :
“Unproductive Ns retreat into their own world & blame others for their isolation. Ns are unproductive when, lacking self-knowledge & restraining anchors, they become unrealistic dreamers. They nurture grand schemes & harbor the illusion that only circumstances or enemies block their success.
Grandiosity & distrust are the N’s Achilles heel, so even brilliant Ns can become self-involved, unpredictable, & in extreme cases paranoid.” ~Michael Maccoby link

Therapist Steven Johnson believes that Ns are “good people tortured by psychological injury & crippled by arrested development, robbing them of the richness of life they deserve. They are living & suffering the narcissistic style”
Gestalt practitioner Linda Martin’s response:   “To only stress their suffering could lead to sentimentality & collusion.” 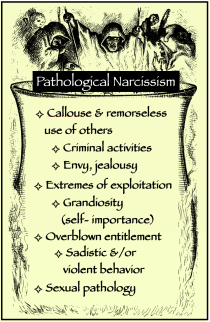 4. PATHOLOGICAL
This level includes several PDs – Cluster B personality disorders – such as Anti-social (the most severe form), Borderline, Histrionic & Narcissistic. PDs represent a way of thinking & feeling about oneself & others that very negatively affect how someone functions in most parts of their life.
“Pathological forms of competitiveness show themselves in many, many areas of human activity. EXP: They’ll go from failing to give others credit for their contributions <– to –> outright plagiarism or stealing of other’s ideas.” ~ Michael H. Stone (2008)

NPD levels
1.  Mild : Obvious problems in many interpersonal relationships & social roles, & in the performance of expected work, but with some areas still functioning. It’s usually not associated with substantial harm to self or others.
✴︎ At this level, such people are capable of achieving the admiration they crave, to gratify their grandiose needs (self-importance). They may function successfully throughout most of their life, but are vulnerable to a breakdown with advancing age as they get less & less attention (N supply)

2. Moderate : Marked problems in most areas of functioning, across a wide range of situations, sufficiently severe that most are not very functional. It’s usually associated with a past history & future expectation of harm to self or others, but not to the degree that it has / will cause long-term damage or endanger life.

✴︎ At the mid-level, their grandiosity prevents any interest in true intimacy

3. Severe : Intense problems in inter-personal functioning, affecting all areas of life. Their overall social dysfunction is profound, with little or no ability or willingness to perform expected work & social roles.
It’s usually associated with a past history & future expectation of severe harm to self or others that caused long-term damage or endangered life – & will again.
✴︎ At this lowest level, their persona also includes borderline personality traits (BPD). Their sense of self is generally unstable & scattered, reeling between pathological grandiosity & being suicidal. ~ Kenneth Levy (2012)

MALIGNANT Ns are even more dysfunctional than NPDs, but not quite AsPD (anti-social). “These lower functioning NPDs (more like sociopaths) will constantly bend the rules for themselves, while outwardly criticizing others for doing the same negative things. They have no remorse for the effects their abuses have on others, & use many rationalizations for their manipulations.” ~ Payson

PSYCHOPATHs – have no ethics, & so don’t need rationalizations.  For them life is a game – figuring out ways to get what they wants now, by whatever means necessary. Since they don’t go by anyone else’s rules, so as far as they’re concerned there are no violations, no exploitation.
They make up their own as they go along, duping whoever they can, shamelessly lying their way in and out of schemes, always ignoring or absolutely indifferent to, the damage they cause. ~Steve Becker